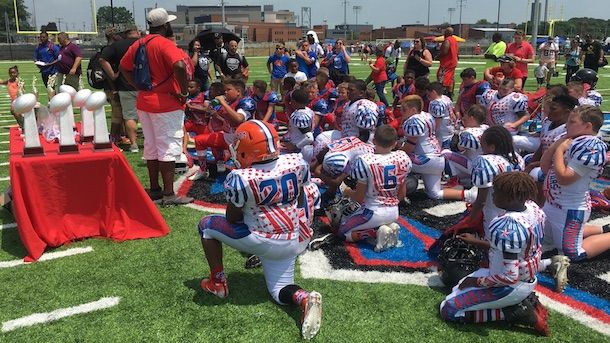 On a sweltering Father's Day at the Pro Football Hall of Fame in Canton, Ohio the Diamond Sports Group hosted their 3rd set of D1 Savage games of the spring/summer. This comes on the heels of a successful set of games on Memorial Day weekend in Virginia Beach, VA. This event served as the third of 4 events in the D1 Savage Series, with one more to be held in Dallas, TX on July 6-8.

Athletes from grades 3rd-8th were in attendance, totaling in 5 games for the day. Each grade (excluding 7/8th grades) group was split into two teams, the White squad and the Red squad.

In the 4th grade game the athletes came to play, as the Red squad was able to put on a show led by their impressive offense.

The White team would make the first big drive of the game during the 2nd Quarter, but their success wouldn't last too long. RB Kingston Fiefia-Cooper broke free for a beautiful 50-yard run to set White up in the redzone. They would quickly score on a short run on the next play. The conversion was good putting the White team on the board first, 7-0.

The Red team's response would be swift, as they wasted no time showing they were the better team.

On what would be their first scoring drive of the game, started with RB Steron Davidson scampering for 30 yard run to put his team in great field position. On the next play, QB Dino Roberts Jr. would scramble for 40 yards while dodging defenders left and right to put the Red team in the redzone.

Davidson would cap off this impressive drive with a 5 yard TD run to the right side on the next play. This tied the game at 7-7 going into the half.

The Red team would dominate the second half of the game, starting with a 15 yard TD run from Davidson on the team's first drive of the 2nd half. This gave Red a 13-7 lead.

Ryan Galeai-Logova would continue the Red squad's as he bullied his way into the endzone for a 2 yard run in the 4th Quarter, putting Red up 20-6.

The Red team would ice the game late in the 4th with a short TD pass from Roberts Jr. to OL Timothy Armstrong.