Nicholaus Iamaleava Jr. is proving to be one of 2023's elite QB talents | Youth1
Skip to main content

Nicholaus Iamaleava Jr. is proving to be one of 2023's elite QB talents

Nicholaus Iamaleava Jr. is proving to be one of 2023's elite QB talents 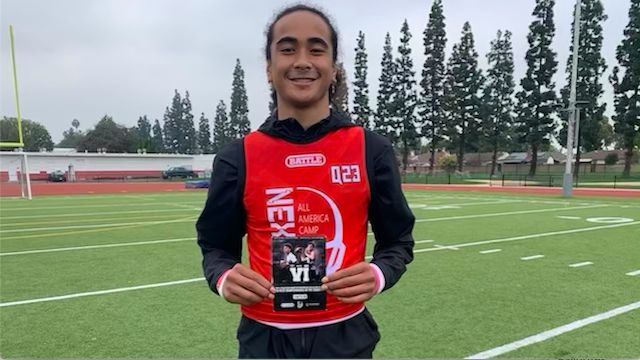 The 2023 class is brimming with talent, especially at the Quarterback position. Among the talented QBs from the 2023 class is Nicholaus Iamaleava Jr., who has built a reputation as one of the nation's rising stars.

The Long Beach, CA native most recently earned an invite to NextGen's The Show, after an MVP performance at NextGen's Los Angeles Showcase back in January.

"This will be my first time competing in The Show. I’m grateful for the opportunity to be acknowledged and be trusted to lead the offense for a talented team of players who share my passion for the game," Iamaleava told Youth1.com.

"It’s an honor to have been chosen. I’m very competitive so I’m proud to have had my hard work acknowledged at this level. It gives me the confidence I need to step my game up at an even higher level now," he added.

Standing at 6'5" 195 lbs., Iamaleava stands tall in the pocket and throws one of the most beautiful balls you'll see. His height is an advantage because it allows him to see clearly downfield to locate his receiver. Perhaps his biggest strength is his arm strength and ability to throw deep balls with precision.

It takes nothing but a flick of the wrist for Iamaleava to deliver a strike. His throwing mechanics on his dropbacks are superb. His arm, hips, and feet all work in concert to deliver a precise ball. Iamaleava can make the throws into tight windows across the middle and drop the ball in on deep throws.

"Since I was little, I mostly played defense and loved it. It wasn’t until I was 10 that I began to play quarterback. I remember being able to barely throw ten yards. I never imagined playing such an important position," Iamaleava said.

"While I miss playing defense, I’ve grown to love the QB position. Thanks to my coaches and trainers, my skill and knowledge of the game has grown tremendously," he added.

Iamaleava is appreciative of the recognition.

"I wouldn’t be completely truthful if I said recognition isn’t important. I have been blessed and am extremely grateful to have been recognized by Youth1’s Elite101 & Freshman450 at a young age," Iamaleava said.

"However, it’s not everything. I just want to continue to play the game I love at a high level and be successful doing it," he added.

Iamaleava most recently played for the Long Beach Poly Patriots and Cerritos Vypers. He has built a reputation for his arm strength and ability to lead his team.

"I believe my poise on the field, especially under pressure, is one my greatest strengths. I don’t let anything distract me or detract from my focus," Iamaleava said of his strengths.

"My leadership skills allows me to build a strong relationship with my teammates, so that they trust me and know I will do what’s best to get the job done and win," he added.

As he looks to take his game to the next level, Nico is dedicated to honing his craft going forward.

"I also want to work on my diet and physique so I can better compete with these older and much bigger players I’ll be facing soon. I want to be more vocal on the field as well," he added.

2023 QB Nicholaus Iamaleava Jr. has proven himself to be one of California rising stars. He has all the physical attribute you'd want in a QB. More importantly, Iamaleava is a humble hard-working young man dedicated to his craft.

Nico is looking forward to competing against some of the nation's best at NextGen's The Show this July.

"I look forward to competing with and against the most talented kids in the nation," Iamaleava said.

"I’m excited to learn from the coaches there and have the chance to pick their brains to see how they view the game and how it will enhance my level of play," he added.

For more on Iamaleava, view his highlights below.