Highly Touted 2022 QB Beau Green Gears Up for a Comeback

Highly Touted 2022 QB Beau Green Gears Up for a Comeback 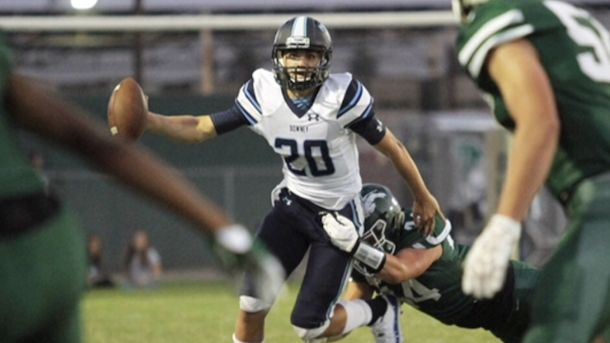 Beau Green from Turlock, Calif., is a young man on a mission. The 2022 quarterback was named to Youth1’s Freshman450 and proved why he was more than deserving of that honor when playing for Downey High School in Modesto, Calif. As a freshman, he started for the varsity team and threw for a combined 1,000 yards and 20 touchdowns in his first four games, with a quarterback rating of 109.3.

Unfortunately, he suffered a shoulder injury during his fifth game that put him on the shelf for the rest of the season. The injury required five months of rehabilitation and eventually surgery. Green, now 6’2” and 210 lbs., is working hard at rehabbing and coming back better than ever, despite the rough road he’s traveled.

“This entire offseason has been very difficult,” he said. “However, I am currently rehabbing, hoping to return sometime this season."

He has also been a part of the National U.S. Army Combine, the USA National Team, Polynesian Bowl Combine, Elite 11 Academy, Rise & Fire Quarterback Camp and more. Even before taking a snap for Downey High, his reputation as a big-time playmaker preceded him.

His long-term focus remains constant—playing Power 5 college football. “That’s been my goal since I was 7 years old and has never changed,” he said. His Youth1 profile also states that he’s aiming for a Division 1 scholarship. So far, it looks like his goal is coming true—on Twitter, he announced that he’s received his first Division 1 offer from William & Mary.

Green’s talent and accomplishments have also attracted the attention of numerous football-recruiting websites, so there should be additional offers in the future, as well.

Green admires the talents of the Cleveland Browns’ Baker Mayfield, citing his ability to both throw and run, as well as making plays using his athletic ability. His current highlight video from the 2018 football season  shows that he shares the same traits as Mayfield, sporting a rifle arm, accuracy, pocket presence and running speed.

For now, he is maintaining a positive attitude while he continues his comeback and heads toward a very promising tomorrow.

“I am so excited to get back to work and look forward to the future,” he said.

For more on Beau Green, check out his Youth1 Player Profile -> here.