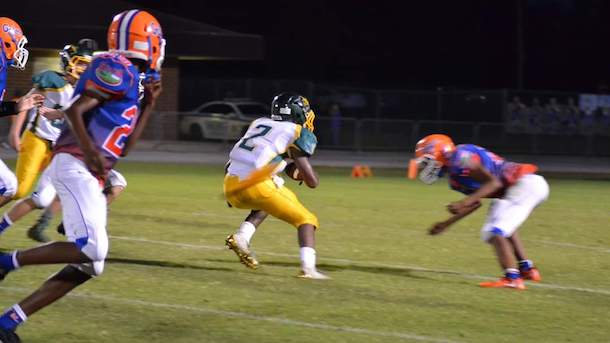 Some football players find success on the field due to their prototypical size, strength and speed. Not so with 2023 LB Jhoel Robinson―he uses his intelligence and love of hitting to make a difference on the football field.

“My favorite part of playing is not just one but two things: the ability to have contact with another player and the ability to use your knowledge to think outside the box on plays,” said the linebacker from Fleming Island, Fla., who was invited to NextGen’s The Show after participating in the NextGen Elite Florida Showcase last December.

“I love playing linebacker―to watch and anticipate the play as it is happening and react based on knowledge and skill,” Robinson enthused. “You don't have to be the fastest guy but you do have to have to have skills and be able to react to plays timely with 100% effort.

“I believe my greatest strengths are my football IQ and awareness,” he added. “I am able to read plays well and react as a result.”

Robinson, who attends and played for Green Cove Jr. High School (the Cougars), is enthused about the chance to be a part of The SHOW.

“I am very excited about the opportunity,” he said. “It gives me an extra boost in my confidence knowing that I can compete on any level with anyone. I am looking forward to competing with the best. I believe it shows that my capabilities as a player are evolving and my confidence level is, too.”

Watching his highlight video, you’ll see that Robinson has a knack for being in the right place at the right time, disrupting and blowing up plays before they have a chance to begin. Once the ball carrier is near, he takes them down like a wrestler, which isn’t an accident―he was a 2018 Northeast Florida Wrestling Champion. Add that to his love of hitting and budding football IQ, you have one tough playmaker. The highlight video also shows that he’s a fast, bruising fullback in the style of Mike Alstott.

However, there’s another NFL great whom he patterns himself after, and that’s Hall of Fame linebacker Ray Lewis.

“He was and is a great leader and motivator on and off the field,” Robinson noted. “In addition, he could read plays and react with some mean hits! His motivational speeches encourage young guys like me to never let anyone outwork you and to keep pushing yourself no matter the challenge.”

Being a student-athlete is a challenge, as well, but Robinson holds a 3.5 GPA at Green Cove, which got him on the honor roll, and he’s been named an Academic All-American. Plus, he pointed out that he’s been prepping for standardized tests like the ACT and SAT.

This spring, Robinson is planning to work with athletic trainers on his speed, agility and skill-position drills to prepare for camps and the upcoming high school season. “As an incoming freshman, I want to be prepared to compete,” he said. “I am constantly working on my speed to not only have a faster 40 time but to increase my reaction to the ball and plays.”

He also plans to attend a few summer football camps that include University of Florida and Ave Maria University.

So when The Show rolls around, one team will be lucky to have Robinson on its side, and the other should be on the lookout for him.