D-Line Essentials: Creating the culture, perfecting the stance, block destruction and pursuit to the ball | Youth1
Skip to main content

D-Line Essentials: Creating the culture, perfecting the stance, block destruction and pursuit to the ball

D-Line Essentials: Creating the culture, perfecting the stance, block destruction and pursuit to the ball 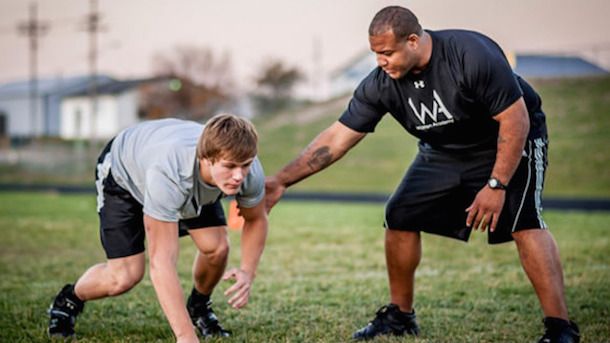 The game of Football has its “glory” positions. If you are not an avid fan of Football, or even if you just follow your college team, chances are that you can probably name a famous quarterback or a random celebrity player like Odell Beckham Jr. at the bare minimum. These are the perks of being a great player in a flashy position like quarterback or wide receiver, after all, they get to touch the ball and that’s what the average fan pays attention to, right? If you were to turn your eye to the unpleasant part of football you may find a whole new side to the great game. I’m talking about down in the trenches where the game is won or lost come show time.

From a strictly defensive perspective, the outcome of a football game can rest heavily on a position that at times receives no glory or recognition at all by most fans unless they have a more advanced knowledge of the game or used to play themselves. The defensive line is the most important position group on the defensive side of the ball. In terms of x’s and o’s, the defensive line sets the tempo and tone of the defense. A passive and weak defensive line gets bullied and tossed out of the way creating massive running lanes for the opposition’s tailbacks and provides no pressure on the quarterback providing him with ample time to sit back, go through his progressions, and deliver a strike to a receiver down field. Massive running lanes leave the linebackers out to dry and give them far too much ground to cover and no pressure on the quarterback sets up your secondary to get picked apart for all four quarters.

You can also see how important a properly coached and physical defensive line talent has become by analyzing the NFL Draft over the past ten years. 28/70 or forty percent of players selected with the first ten picks in the last ten drafts between 2007 and 2017 have been defensive linemen or pass rushing outside linebackers, who are effectively d-linemen in some 3-4 defensive schemes. The percentage increases to fifty-four percent when you eliminate quarterbacks from the equation (they are often taken early due to the scarcity of talent at the position and teams may reach to secure any prospect they consider viable).

If you are a defensive coordinator or a head coach of a youth football team, creating a defensive culture and identity for your team should be paramount. The defensive line should always be the tone setters on defense. They are at the initial point of attack every single play and the game goes as they go. It is important to instill a sense of dominance and fearlessness into the spirit of your defensive line. They must use their relentless effort and high motors to constantly break down the offensive lineman’s blocks and must have the courage to withstand a beating game in and game out. As a coach, it is essential that the young men with their hand in the ground every play understand how important it is to be the hammer and not the nail.

It is important to recognize that just because you are on defense does not mean that you should allow yourself to be blocked. You will be blocked in football, as it is part of the game, but this is different than staying blocked. Being the hammer and not the nail as a defensive lineman means that you can deliver the first strike and not just try to survive the play. As a defensive lineman you should learn early that you can dominate the offensive player and and disrupt the play while adhering to your responsibilities. Being a physical football player is a prerequisite to play on the defensive line, not to mention almost every other position on the defensive side of the ball. Any good team’s defensive culture should also hinge on their pursuit of the ball. Every player should desire to be the one to make the play and have the motor and work rate to pursue the ball carrier as long as it is humanly possible and tactically necessary.

A proper set-up is important in athletic sport or movement. Not only referring to football but to weightlifting, lacrosse, soccer, basketball, or any sport. On the defensive line, failure to secure a proper stance can lead to serious injury in the worst case and a terrible technique as the utmost best case scenario. With that being said, proper technique is critical to the cultivation of a proper young defensive line prospect.

It varies per coach and position on the defensive line but the general rule of thumb is that the defensive lineman should begin with the feet slightly wider than shoulder width apart. As an interior lineman, a wide and stable base will assure that you are not pushed over the relative ease and can sit low in your stance once you engage your opponent. You can either keep your feet level or stagger them, in which case the foot that is aligned to the shade of the man you are on will be staggered about six inches back from the other. As an edge player, and depending on what type of technique your coach wants you to play, you may be tilted on the outside shoulder of the tackle as a five-technique or playing head up on the tight end as a six-technique. In either case, your feet should be set up the same as an interior lineman with the exception of having a greater stagger during pass rush plays as a true edge player. In this circumstance you can get yourself in a proper sprinter’s stance in order to fly off the edge with speed and acceleration.

After the feet come the hands. In a three-point stance, your down hand should be the same side as the foot that is staggered back. In a four-point stance, both hands will be placed out in front of your face on the ground. If your coach were to come by while you were in your stance and move that hand out from underneath you, you should fall flat on your face. This means that your weight is leaning pretty heavily on that down hand or down hands.

From your proper set up and your alignment come the next steps of steps and block destruction. Your hands are the most important part of block destruction and can cover for you if you take a poor step or forget to step at all. While staying low to maintain a great center of gravity and good base, you should aggressively step to your designated man (usually whoever you are shaded to, unless you are stunting which is a different topic) and throw your hands into the offensive lineman’s chest plate. Your thumbs should be facing upwards and both hands should be close together in order to hit your target square in the numbers. From here, you secure your gap and dispose of the offensive lineman in whatever way is most suitable for your situation. Coaches often teach rip moves, shrug moves and arm-over moves in order to disengage an offensive lineman. An over looked part of being a defensive lineman is being destructive. As part of being the hammer and not the nail, defensive lineman should recognize that they can push the offensive lineman back into ball carriers and the quarterback during the game, which will disrupt the timing and execution of their plays. It should be cautioned here, however, that at times attempting to do too much can create more problems than it solves. The next step should be pursuit to the ball.

Pursuit to the ball is part of the defensive culture. If you are a great defensive lineman with no desire to get involved in chasing the ball and making a play elsewhere on the field, then you hurt your whole team and tarnish the culture mentioned earlier. It shows that you are lazy and only do as much as you can to get by. However, pursuit to the ball needs to be efficient and smart pursuit and not blindly running after the ball carrier with a terrible angle and no regard to your surroundings. While pursuing the ball it is important to do a few things. Finding the best pursuit angle is the most important step to a good pursuit. As a defensive lineman, odds are that you are not as fast as the opposition’s backs or receivers and you need to outsmart them in order to make a tackle. Cutting them off with good pursuit angles by not running straight down the back of a teammate is important. Do not run right behind your teammate while chasing down a player, instead, pick a different spot a yard or two down the field from him and try to beat the target there instead. This will prevent wasted numbers in pursuit and allow more players on defense to get involved in corralling a runaway player. Another thing young defensive players should focus on is recognizing trick plays. Sometimes, the other team will throw a curveball at you in the game plan and utilize misdirection in an attempt to gain an advantage. Be aware of what the team is setting up to do and recognize any players doing things out of the norm. If no one on the defense recognizes that the team is running a reverse, then you may all be left running the wrong way while the other team has gone for six points. This includes fake handoffs and toss pass plays.

These are the basics of the defensive line position and as youth players progress throughout high school and college their coaches will implement and tweak small things about their technique that will aid in their development. Hopefully, in the next few years the trend of the defensive line becoming a more coveted position will continue and more young players will aspire to be the next big star defensive tackle or the next hall of fame defensive end.

Gear guide to proper fit and maintenance for football equipment

Brandon Blaise 2 years ago
next page?