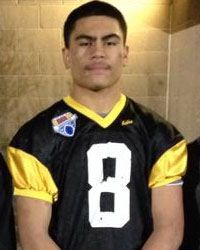 Over the past two seasons, the Inland Empire Ducks out of California have produced some of the biggest names in youth football when it comes to prospects.  Beginning with last yearâs 2017 Elite 101 and 2017 Evolution list quarterback Tate Martell to this year with 2018 Elite 101 members Brendan Radley-Hiles, Rasheed Nailor, Re-Al Mitchell and many more. Now, the latest Duck to fly onto the national radar is 6â1â WR/LB Merlin Robertson.

Robertson isnât exactly new to the national scene, as he was ranked the No. 68 overall prospect on the 2018 Elite 101 this past July.  The Carson, California product certainly backed up that ranking and showed why he could have been ranked much higher by helping the Ducks to a 12-1 record.  Excelling on both sides of the ball, Robertson estimates an average of between 8-10 tackles per game in addition to 13 sacks, 12 tackles for loss and four interceptions.  Offensively, he added seven touchdowns as well.

Following his stellar regular season, Robertson was named a 2014 Eastbay Youth All-Americanâone of six Ducks to be selected for the prestigious game.  The winning tradition heâs been a part of continued in the All-American Bowl, as he was part of the first West squad to win the 8th grade game.  In the Bowl game, he made one of the lasting plays of the contest with a hustling tackle on a missed field goal the East team was attempting to return for a touchdown. 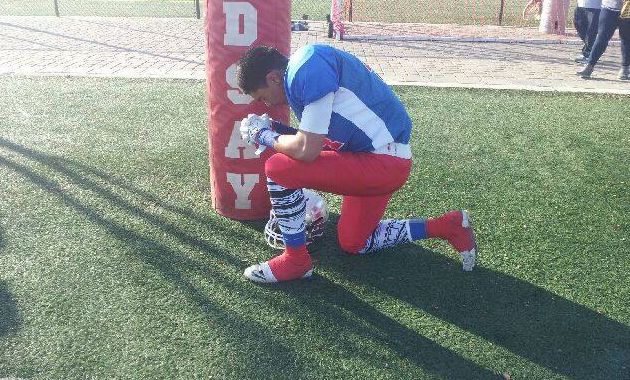 âIt was a great experience getting to meet new friends and playing with some great young men in the games,â said Robertson.

With his youth career now in the books, Robertson and his 4.7 40-yard dash time are preparing for the future.  Already receiving contact from the University of Washington, Robertson will look to jump on the radar of other PAC12 schools such as USC and Oregon by attending FBU, B2G and Nike camps this offseason.  Though he doesnât know where he will attend high school yet, there should be a number of suitors for this 2018 student-athlete.

âI am very involved with my church,â he said.  âI have youth activities and mutual every Tuesday night.  I am also the student body President for my middle school.â

Relatives of Robertsonâs have attended and played football at various schools all over the western-half of the United States.  With family ties to UTEP, New Mexico State-Highlands, Texas A&M-Commerce, USC, UCLA, BYU, Cal-Berkely, Utah State, Hawaii and Chapman, many doors are waiting to be knocked on.  However, only time will tell for Merlin.