Ja’Kobi Whitaker is one of the most promising young prospects in the Class of 2031.

The 4-foot-7, 87-pound Whitaker is an electric wide receiver who plays for the New Braunfels Jr. Cougars. 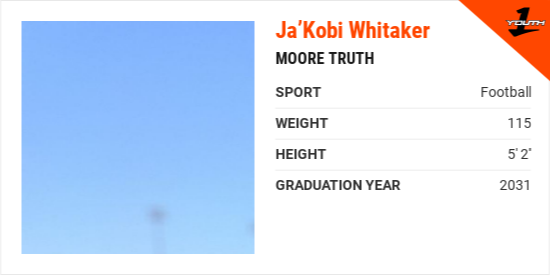 Whitaker had an incredible stretch of two games where he amassed 8 touchdowns.

Whitaker has an impressive collection of accolades, such as: 2-time team MVP, 2-time League MVP and All District Team selection.

Whitaker is appreciative of the recognition.

“It means a lot, shows me that all my hard work and dedication isn’t going unnoticed,” Whitaker said.

Whitaker will also be making the rounds at some lofty combines. Whitaker has been invited to the Blue Chip National combine, Youth Rising Stars national combine and at the end of July he'll be playing with the Las Vegas select team in the flag national championship at AT&T Stadium.

Whitaker says his proudest moment is scoring the game-winning touchdown in the Super Bowl.

Whitaker takes great pride in being a leader on his team.

“A good teammate always picks his teammate up when they are down, keeps their teammates motivated even when things are going bad, and never gives up or loses faith in their teammates,” Whitaker said. “You win In class so you should also lose with class. Keep your head up after a loss, congratulate your opponent, and come back to practice ready to work.”

Whitaker brings an aggressive mindset to the gridiron.

“Even though I’m an offensive player my mindset is to stay on the attack,” Whitaker said. “Beat my opponent off the ball every play.”

Whitaker is grateful to his coaches for the wisdom they’ve imparted.

“I’ve learned from my coaches to not lose sight of your main goal,” Whitaker said. “Have good character, give 110 percent even when you think no one is watching. Someone is always watching.”

Whitaker has learned about the value of hard work from football.

“I train 3-4 days a week and something my dad has always told me is that if it was easy, anyone could do it,” Whitaker said.

Whitaker explains what makes him so passionate about football.

“I love scoring touchdowns, winning games, and building that brotherhood with my teammates,” Whitaker said.

Whitaker patterns his play after one of the greatest wide receivers of all time.

“I love a lot of active players but my favorite is a Hall of Famer that I’ve been watching clips of on YouTube for years, Randy Moss,” Whitaker said. “He is very good and he knows that he is good. The confidence he has in himself is mind blowing.”

“I do cone, ladder, and hurdle drills to improve my speed and agility,” Whitaker said.

Whitaker has set specific goals for when he reaches high school.

Whitaker lists math as his favorite subject in school because of his love of numbers.

As for college, Whitaker has a clear-cut No. 1 as his dream school.

“1. Oklahoma, 2. Clemson, 3. Alabama. If you are wondering why Oklahoma it’s because I’m originally from Oklahoma,  a small town called Idabel, so I am a Sooner fan,” Whitaker said.

Whitaker has unique matureness for his age and he believes it will serve him well as he strives for his dreams.

“What sets me apart from other athletes my age Is my speed, foot work, and hands are well beyond my years. I believe I have hands better than some 11 and 12 year olds at age 8. I put in work. I don’t know too many 8 year olds with personal trainers, position coaches or even willing to train and push themselves to get better 3-4 days a week all while maintaining good grades and competing in the classroom,” Whitaker said. “I work hard even when I know my coaches and trainers are not watching because I know I’m not cheating them, I'm cheating myself. I am a great leader, when things are going bad for me I don’t hold my head. I know my teammates look up to me so when I’m having a bad game I keep fighting, stay motivated and don’t show weakness because I know my teammates feed off my energy.”