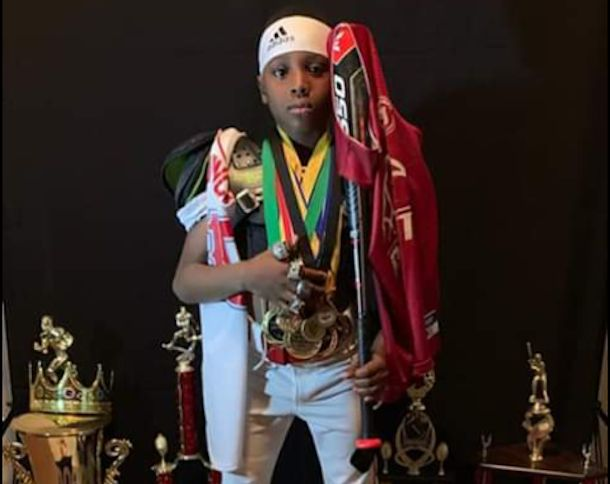 Zion Duncan is one of the best players from the Tuscaloosa, AL area in the Class of 2030.

The 4-foot-8, 80-pound Duncan, who attends Woodland Forest Elementary, is a dynamic player that works as a quarterback and ATH for the Bessemer Tigers.

Duncan is humbled by the accolades.

“Each and every award showed me that with God first, hard work, discipline, and dedication anything I want in life I can achieve,” Duncan said. “Playing against the best competition is what I always like and want and being on the biggest stages brings out the best in me and I love every moment of the big stages.”

No matter the opponent, every game Duncan is determined to give it his all.

Duncan is going all out.

The motor is always at full throttle whenever Duncan steps between the lines.

“My mindset is to be as calm and poised as possible as the leader and commander of my team,” Duncan said. “I want to win with class and character.”

Duncan has great passion and energy whenever he’s on the field. Duncan tells why he enjoys the game of football so much.

“What I love most about playing football is the competition,” Duncan said. “I love to compete and win. It’s a joy to win a big game and be able to celebrate in the locker room with my teammates.”

Duncan has learned many valuable lessons from playing football that he applies to his everyday life.

“At QB the kid has one of the best arms I’ve ever seen for 7u and absolutely has the best IQ,” Wren said. “He’s always thinking touchdown and he has incredible big play capabilities. The defense is on the edge of their seats the whole time he’s on the field.”

Duncan takes his role as one of the leaders on the team very seriously. Duncan makes sure he’s a daily positive influence on his peers.

“I demonstrate being a good teammate by having my team’s back, giving 100 percent effort on every play by example and always letting my team and coaches know I couldn't accomplish anything without them,” Duncan said. “My best advice to my teammates is to fight as hard as we can until the clock hits zero.”

Wren adds that Duncan is one of those consummate teammates that every squad needs to be successful.

“He’s always teaching and put other kids in their right place and he’s not all about Zion,” Wren said. “He always give thanks to his team and sets a positive example. His peers really have a lot of respect for him.”

Duncan is appreciative of having amazing male role models that are supportive.

“My coaches have taught me to play hard and fast and give 110 percent with maximum effort at all times,” Duncan said. “The best advice my coaches have given me is to have confidence in myself and teammates and with that we can beat anyone.”

Wren is an advocate of Duncan’s capabilities.

“Last week in the War Zone Bowl he asks for the ball in OT and made 3 kids miss and walked in the end zone,” Wren said. “We wouldn’t have the success that we did without his contributions.”

In addition to making clutch plays, Duncan is developing a high level of football IQ as well.

Duncan is growing into excellent football awareness that puts him in position to thrive.

“He knows where every kid on the field should be and that’s how he makes plays,” Wren said. “He’s a very smart player that always puts himself in a position to make plays.”

Duncan is on the grind to perfect and hone his craft in any way possible.

“His work ethic is crazy and I can’t sit here and say that I can take any credit for how Zion plays,” Wren said. “His dad puts in a lot of work in with him. The kid is humble and special.”

Wren explains why he compares Duncan to the No. 1 pick in the 2019 NFL Draft.

“I compare him to Kyler Murray because the kid can make a bad play great at any time and he’s fast,” Wren said.

Duncan patterns his mentality after the rookie quarterback.

“I look up to Kyler Murray because he shows that you can go pro in two sports because I also play baseball and I feel I'm the best player in the country at both sports,” Duncan said.

Duncan is constantly striving for greatness in everything that he does.

“My goals on and off the field are to become the best professional athlete ever and to help poor people,” Duncan said.

“I want to either play at Alabama or Clemson because they have great programs and coaches,” Duncan said.

Duncan lists reading as his favorite subject in school.

“My favorite subject is reading because I enjoy learning about new things,” Duncan said. “Reading can really teach you a lot.”

Wren lists the improvements that will take Duncan’s game to the next level.

“We are always working on his mechanics and understanding of defensive schemes,” Wren said.

Wren believes the sky is the limit as long as Duncan continues to stay hungry.