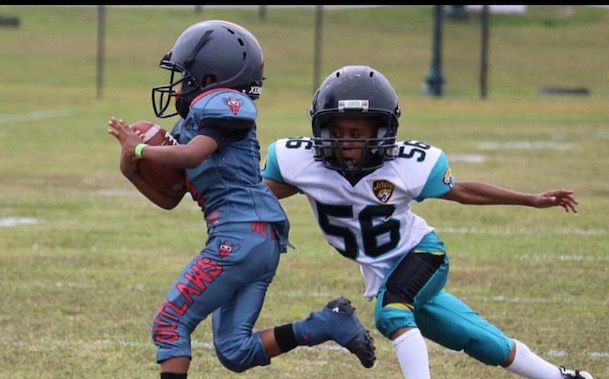 Preston Bonner is one of the best players from the Newnan, Georgia area in the Class of 2030.

The 4-foot, 60-pound Bonner, who attends Callaway Elementary School, is a dynamic player that works as a quarterback, running back and safety for the Newnan Outlaws.

Bonner has earned plenty of recognition during his outstanding career, such as: Newnan Outlaws 6U Most Valuable Player and being a member of the No. 3 ranked 7U team in the nation by Generation Nexxt.

Bonner is humbled by the accolades.

“To be a part of a 2018 MAYFL 6U championship team is an unexplainable feeling. We were the underdogs who were faithful, worked hard, and came out on top earning the title we worked so hard for. At the end of our season, we celebrated with an end of the year banquet and I was awarded Most Valuable Player. This award meant a lot to me and especially my parents. Football is not just a game of skill, but of integrity as well,” Bonner said. “Being on the field is my thing so to be able to play on a team with my brothers, win a division championship, and earn a rank in nationally all in one year was an emotional experience.”

No matter the opponent, every game Bonner is determined to give it his all.

Bonner is going all out.

The motor is always at full throttle whenever Bonner steps between the lines.

“My mindset in my position is to not only be a leader on the field but off the field as well. My parents always stress the importance of leadership to me daily,” Bonner said. “My mom, an educator, actually always says to me daily as I begin my school day to ‘always be respectful, responsible, and safe. Be a leader and not a follower. Be you, be great!’ This has stuck with me in school and on the field.”

Bonner has great passion and energy whenever he’s on the field. Bonner tells why he enjoys the game of football so much.

“I love being in the company of my teammates,” Bonner said. “We are family and have built a real relationship that’s deeper than just the game of football.”

Bonner has learned many valuable lessons from playing football that he applies to his everyday life.

“Playing football has taught me that you have to work hard if you want to be good at something, nothing is ever given,” Bonner said. “It’s always earned.”

“Winning the league championship is my favorite memory,” Bonner said. “We were down 14- 0 halftime and came back to win 21-14 in overtime with me at QB leading the team. It’s my favorite moment because we were down and didn’t give up.”

Jamien Bryant is Bonner’s coach for the Newnan Outlaws.

“At QB it’s his throwing abilities. At RB it’s his vision combined with his ability to cut and break tackles. At FS he can hit and is a natural ball hawk,” Bryant said. “His technique is very good and some wouldn’t expect him to move as smooth as he does.”

Bonner takes his role as one of the leaders on the team very seriously. Bonner makes sure he’s a daily positive influence on his peers.

“I always try to set the tone in practice by being first during all drills and workouts. I’m not first every time but as a leader on the team I try to be an example for the new players and all of my teammates,” Bonner said. “I tell my teammates keep going and don’t be afraid of bigger guys. They can go down too.”

Bryant adds that Bonner is one of those consummate teammates that every squad needs to be successful.

“He demonstrates leadership with his actions by working hard in practice,” Bryant said.

Bonner is appreciative of having amazing male role models that are supportive.

“We have a tough coach. He pushed us hard but it made us stronger and helped us to be able to deal with difficult situations when it’s game time. My coach has taught me to never give up even when it’s hard. I think this lesson is one that can be used on and off the field,” Bonner said. “The best advice my coach has given me has to be to always be tougher than the team you are playing.”

Bryant is an advocate of Bonner’s capabilities.

“He made a 40-yard touchdown vs. Riverdale in the first round of B2C. It was a big game changer,” Bryant said. “Also, also his interception vs the world famous Jags in Gen Nexxt nationals sealed the game for us.”

In addition to making clutch plays, Bonner is developing a high level of football IQ as well.

Bonner is growing into excellent football awareness that puts him in position to thrive.

“He trust his instincts and once he sees it whether it be a hole at RB or an interception at safety, he displays the IQ to read and make the play,” Bryant said.

Bonner is on the grind to perfect and hone his craft in any way possible.

“He has a great work ethic,” Bryant said. “He trains with a speed trainer in his hometown.”

Bryant explains why he compares Bonner to this Super Bowl champion.

“I’d compare him to Earl Thomas because he’s smart, savvy and a hard hitter,” Bryant said.

Bonner patterns his mentality after this star wide receiver.

“Odell Beckham is my favorite player because he makes some amazing catches and I like his hair!” Bonner said.

Bonner is constantly striving for greatness in everything that he does.

“My goals on and off the field are similar,” Bonner said. “I want to give my best shot at life and I always but my best on the field.”

Bonner lists math as his favorite subject in school.

Bryant outlines the areas of improvement that will take Bonner to the next level.

“He needs to improve with his patience before the play so that he won’t be out of position on some plays,” Bryant said.

Bryant believes the sky is the limit as long as Bonner continues to stay hungry.

“There’s no doubt in my mind he’ll play on Saturdays and possibly Sundays,” Bryant said. “He plays with a chip on his shoulder and that’s something you can’t coach.”