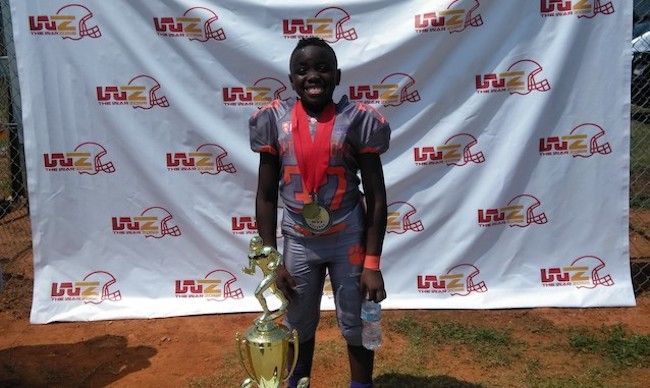 RaShard Williams is one of the best players from the Birmingham, AL area in the Class of 2029.

The 4-foot-8, 84-pound Williams, who attends Ephesus Academy, is a dynamic player that works as a running back, defensive back, defensive end and linebacker for the Bessemer Tigers.

Williams has earned plenty of recognition during his outstanding career, such as: the only 5-year-old starting on the 6U team for "The Baby Show", MVP of the Magic City Championship and an All-Star game selection.

“I participated in an All-Star game last season where I got to meet a lot of great athletes. It makes me feel good to see other boys doing what they have a passion to do each day,” Williams said. “New experiences are always fun and exciting. I love competing against other great players.”

No matter the opponent, every game Williams is determined to give it his all.

“When I play on offense, my main concern is making sure my teammates block for me and just burst through the holes by any means necessary,” Williams said. “When I am on defense, I think like an animal. I just want to attack. Defense is where I can use all my strength. I love to tackle, even my family.”

Williams has great passion and energy whenever he’s on the field. Williams tells why he enjoys the game of football so much.

“I love the adrenaline I get when I am out on the field. I love learning new plays and everything there is about football,” Williams said. “I love to hear my mom yelling my name from across the field.”

“Playing football has taught me how to communicate with others, how to be obedient and listen to those in charge and also how to have fun and be a kid,” Williams said.

“My favorite memory was winning the championship,” Williams said. “The look on my teammates and coaches face made me happy knowing I played a role in making it happen.”

“As a running back, he runs so hard and with so much control. At defensive end, he is just a freak of nature,” Wren said. “At defensive end he just does his job and more. The kid is the smartest kid on the field at all times.”

“Being a good teammate consists of being positive and helping out the boys on the team that doesn’t catch on as easy. I always like to lend a helping hand,” Williams said. “The best advice I've told my teammates is if you mess up, it is okay. None of us are perfect. Just try again.”

Wren adds that Williams is one of those consummate teammates that every squad needs to be successful.

“He demonstrates leadership by the way he does everything from the small things to the big things,” Wren said. “The kid gives his all and wants the same from his teammates.”

“The best advice my coaches have given me is to trust myself and to create my own style that people will remember me by,” Williams said. “My coaches always talk about being as one: one team, one sound, one unit.”

Wren is an advocate of Williams’ capabilities.

“Last year in the All-Star game the kid played both sides of the ball and was the best player on the field,” Wren said. “He showed this from making sack and Tackle for losses and running the only Touchdown for Team Alabama.”

In addition to making clutch plays, Williams is developing a high level of football IQ as well.

Williams is growing into excellent football awareness that puts him in position to thrive.

“He uses everything my coaches and I teach him. Only four games in, he has six touchdowns and a pick-six,” Wren said. “He’s a very smart player that always puts himself in a position to make plays.”

Williams is on the grind to perfect and hone his craft in any way possible.

“The kid works out with one of the best trainers in Alabama in coach Leonard Stephens at Step by Step Sport Training and he works out like a high school kid,” Wren said.

Wren explains why he compares Williams to this standout.

“I compare him to former Alabama running back Derrick Henry because he has one of the best stiff arms you’ll ever see,” Wren said.

Williams patterns his mentality after this player.

“My favorite NFL player is Ray Lewis. I watch his videos every single day,” Williams said. “I like to use his same aggression when I play on defense.”

Williams is constantly striving for greatness in everything that he does.

“My goals are to keep striving for all A's in school and making my parents happy,” Williams said. “My mom always says ‘Can't have fun if your school work is not done.’”

Wren lists the improvements that will take Williams’ game to the next level.

“Playing without having his hand in the ground,” Wren said. “Last year he was the best defensive lineman in his age group. We have taught him how to play standing up and he looks like he’s done it all his life.”

Wren believes the sky is the limit as long as Williams continues to stay hungry.

“His potential is unlimited,” Wren said. “He will be one of the best running backs in the country.”