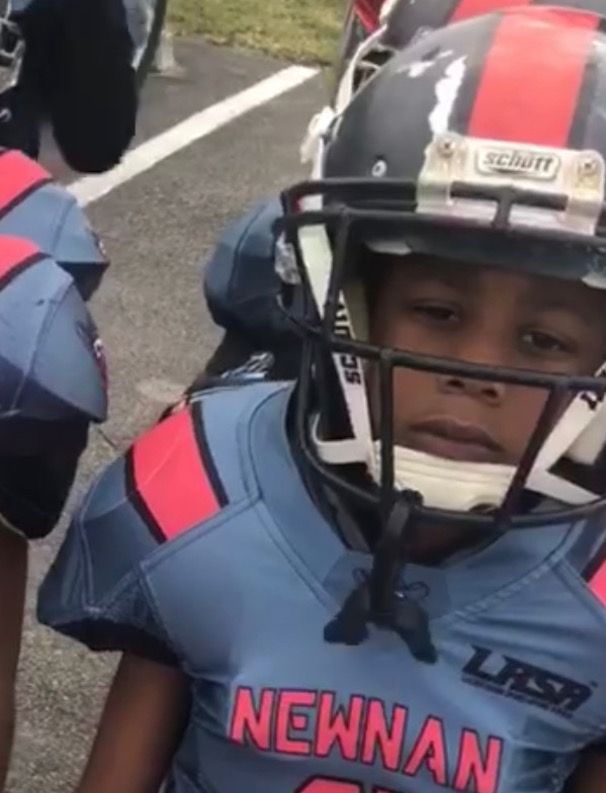 Jaydin Reed is one of the best players from the Newnan, Georgia area in the Class of 2029.

The 4-foot-2, 62-pound Reed, who attends Northside Elementary, is a dynamic player that works as a running back and cornerback for the Newnan Outlaws.

No matter the opponent, every game Reed is determined to give it his all.

Reed is going all out.

The motor is always at full throttle whenever Reed steps between the lines.

“My mindset in my position is to be a leader on and off the field. I want to be a positive example for my teammates at all times,” Reed said. “I want to prove to my coaches that they can trust me.”

Reed has great passion and energy whenever he’s on the field. Reed tells why he enjoys the game of football so much.

“I love being on defense and making big plays that make the crowd go wild,” Reed said. “I love to win games with my teammates and celebrate with them. My teammates are like brothers to me.”

Reed has learned many valuable lessons from playing football that he applies to his everyday life.

“Playing football has taught me so much about life,” Reed said. “It has taught me how important it is to never give up. Don’t quit no matter how hard something is and you’ll be rewarded for it.”

“When I popped No. 1 from Gresham. It was revenge for when he dominated us in our 5U championship. I was really motivated so it was great to lay the wood like that. The crowd was going crazy,” Reed said. “That was so amazing and I’m never going to forget it.”

Jamien Bryant is Reed’s coach for the Newnan Outlaws.

“At running back he runs with a purpose. He doesn’t waste any motion out there. He’s very hard nosed at CB. He has playmaker ability. There’s no running nor passing to his side,” Bryant said. “Jaydin loves making plays, especially stripping the ball from opponents. The opponent really has to be aware of him at all times or else they’re going to get burned.”

Reed takes his role as one of the leaders on the team very seriously. Reed makes sure he’s a daily positive influence on his peers.

“I try to be a good teammate by encouraging them to keep pushing. I make sure my teammates go hard at all times,” Reed said. “The best advice I give to my teammates is always listen to the coach and drink water before and during practice. It’s really important to stay hydrated.”

Bryant adds that Reed is one of those consummate teammates that every squad needs to be successful.

“During games he sets the tone with big plays, which motivates his teammates to play at a high level,” Bryant said. “He leads by example and through his effort. His teammates follow suit.”

Reed is appreciative of having amazing male role models that are supportive.

“My coaches help make me a better player and person,” Reed said. “They’ve taught me about giving my best effort and being disciplined on and off the field. The best advice they give is work hard and never give up.”

Bryant is an advocate of Reed’s capabilities.

“One play that stands out in particular is a double pass from his twin Braylin to him to go up in the Super Bowl 21-0 over Decatur Army,” Bryant said. “We wouldn’t have the success we did without his effort.”

In addition to making clutch plays, Reed is developing a high level of football IQ as well.

Reed is growing into excellent football awareness that puts him in position to thrive.

“Jaydin knows every play in the playbook. He’s always very prepared for any situation that may come up on the field. He even helps teammates when they’re in doubt,” Bryant said. “His awareness level is excellent.”

Reed is on the grind to perfect and hone his craft in any way possible.

“Jaydin loves to compete so he gives 110 percent in practice,” Bryant said. “I have no doubt in my mind that he’s going to come out sharp by the time next season rolls around.”

Bryant explains why he compares Reed to the Honey Badger.

“Jaydin puts you in the mind of Tyrann Mathieu with his savvy playmaking ability on defense,” Bryant said. “He can do much of the same things for a young player at his age.”

Reed is constantly striving for greatness in everything that he does.

“My dream college is Florida State University,” Reed said. “I would love to play there because I love Florida and I feel like I can help them get more national championships.”

Reed lists language arts as his favorite subject in school.

“I really like language arts because I love to spelling,” Reed said. “Language arts has just always been really interesting to me. I know that it’s a subject that will help me be educated in my life.”

Bryant outlines the areas of improvement that will take Reed to the next level.

“Jaydin has to work on being more disciplined on the field and then he’ll be a total beast,” Bryant said. “But I’m confident that this will be developed because he’s still young and he has a good support system.”

Bryant believes the sky is the limit as long as Reed continues to stay hungry.

“He’s a tough kid that loves the game of football and with a boost in work ethic he’ll be a Saturday and possibly Sunday player,” Bryant said. “I’m proud to be his coach and I’m excited for what the future holds for his career.”