2026’s Jaedyn Powell is a savvy student of the game

2026’s Jaedyn Powell is a savvy student of the game 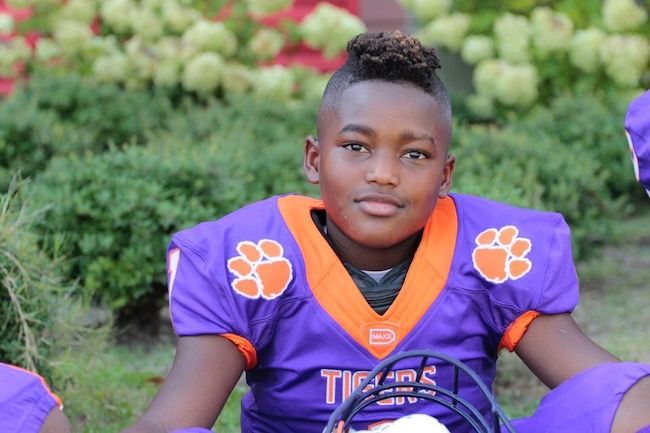 Jaedyn Powell is one of the best players from the Birmingham, AL area in the Class of 2026.

The 5-foot-2, 105-pound Powell, who attends Wilkerson Middle School, is a dynamic player that works as a quarterback, safety, and defensive end for the Bessemer Tigers. 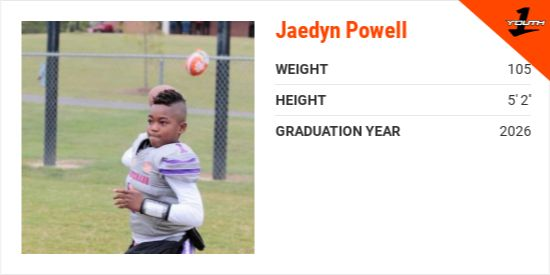 Powell has earned plenty of recognition during his career, such as:

8u Hustle Award recipient  from the Tournament of Champions

Powell is humbled by the accolades.

“It means a lot to me and shows me that my hard work does pay off. It also keeps adding to my trophies, rings, and medals,” Powell said. “Participating in these events is like a next level experience.”

No matter the opponent, every game Powell is determined to give it his all.

Powell is going all out.

The motor is always at full throttle whenever Powell steps between the lines.

“My mindset is don’t let anything or anybody get in my way,” Powell said.

Powell has great passion and energy whenever he’s on the field. Powell tells why he enjoys the game so much.

“I love championships and getting rings,” Powell said.

“As a QB, he is highly intelligent and his ability to diagnose what a defense is presenting to him makes him a great asset to any team. As a safety, he is very familiar with how the QB should move as he goes through his progressions, so it makes it easier for him to make adjustments,” Matthews said. “At both positions he makes a constant effort to study the game and to become a true student of the game, so as a result he always has a leg up.”

Powell takes his role as one of the leaders on the team very seriously. Powell makes sure he’s a daily positive influence on his peers.

“I like to pick my teammates up if they make a mistake or if the coach is on them. I try to help build them up and be a good example for them to follow,” Powell said. “I tell my teammates that how you practice is how you will play. Take all opportunities seriously.”

Matthews adds that Powell is one of those consummate teammates that every squad needs to be successful.

“He understands that repetition is key, so he never tries to get out of a workout,” Matthews said. “He is always ready and willing to dive in.”

Powell is appreciative of having amazing role models that are supportive.

“My coaches always tell us that we have to put in the work and that we are our own competition. So I always work to be better than I was the day before. This also goes for my life off the field,” Powell said. “If a coach is fussing at you or on you about something, it means that they know your potential and they care. Be worried when they stop getting on you.”

Matthews is an advocate of Powell’s capabilities.

“He has stepped up in numerous games where it was a close battle and made key plays to not only put the team in position to score, but also led the scoring drive,” Matthews said.

Powell has excellent awareness that puts him in position to thrive.

“As a safety, he can read the quarterback's movements and understand what direction the play is moving,” Powell said. “This is a valuable asset to getting critical turnovers.”

Powell is on the grind to perfect and hone his craft in any way possible. Matthews loves Powell’s drive and determination.

“He works out in practice with the team in order to gain better mechanics as well as a clear understanding of how to move,” Matthews said. “Second to that, he is always working with a trainer on his own to get better.”

“My dream college is the University of Oregon because of DeAnthony Thomas. He was my favorite player there,” Powell said. “I also like how balanced their offense is and how they disguise their plays.”

Powell lists math as his favorite subject in school.

“I am great with numbers and it challenges me,” Powell said. “I love a challenge.”

Matthews explains why he compares Powell to this Super Bowl champion quarterback.

“I compare him to Russell Wilson because he isn’t the biggest or the strongest, but he is always willing to work to become better,” Matthews said.

Powell patterns his mentality after this NFL MVP quarterback.

“I look up to Cam Newton because he can run and throw the football,” Powell said.

Matthews lists the improvements that can take Powell’s game to the next level.

“Being a better leader in intense situations as well as managing the mental aspects of the game,” Matthews said. “Mistakes are a part of all sports. Each player must understand that there are plenty of plays to make up for the mistakes.”

Powell is striving for greatness in all that he does.

“My goal is to give 100 percent effort in everything I do,” Powell said.

Matthews believes the sky is the limit as long as Powell continues to stay hungry.

“He has the potential to make it in both baseball and football if that is what he desires. Each sport has its own hurdles and hardships,” Matthews said. “But his level of intelligence with the athletic ability he has will take him everywhere he desires to go.”