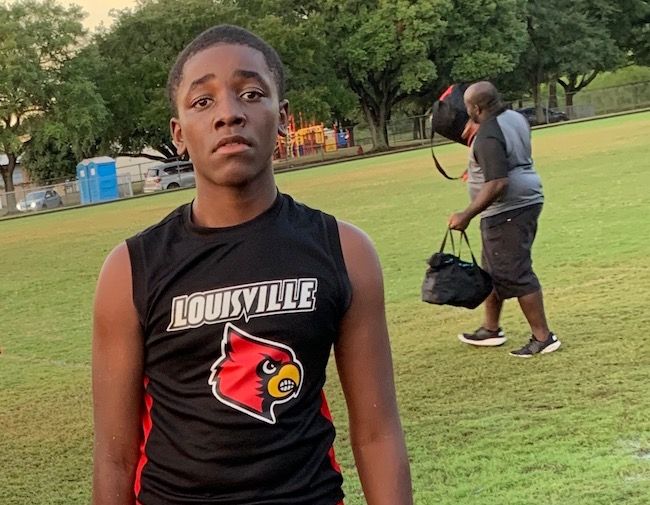 Jadden Perkins is one of the best players from the Houston, TX area in the Class of 2025.

The 5-foot-9, 150-pound Perkins, who attends Null Middle School, is a dynamic player that works as a quarterback. 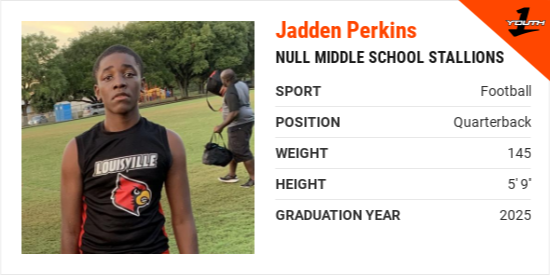 Perkins is humbled by the accolades.

“It means a lot to me and it motivates me to think that I can play at LSU,” Perkins said. “It was a great experience that showed me if I work hard, the rewards are great.”

No matter the opponent, every game Perkins is determined to give it his all.

Perkins is going all out.

The motor is always at full throttle whenever Perkins steps between the lines.

“My mindset is to be the best I can be and dominate on the field,” Perkins said.

Perkins has great passion and energy whenever he’s on the field. Perkins tells why he enjoys the game of football so much.

“I love competition, the contact, and knowing my mom is in the stands cheering and coaching me from the stands,” Perkins said.

Perkins has learned many valuable lessons from playing football that he applies to his everyday life.

“Football has taught me that if I work hard, it will pay off,” Perkins said.

“My last middle school game in seventh grade because I put my team on my back. I scored all 19 points to beat our rival school C.E. King Middle School,” Perkins said. “That made me feel     good to know that I did whatever it took to help my team win.”

Perkins takes his role as one of the leaders on the team very seriously. Perkins makes sure he’s a daily positive influence on his peers.

“I demonstrate being a good teammate by being a leader on and off the field, being a student athlete and keeping my grades up,” Perkins said. “The best advice I give is to never give up or be afraid to compete against anyone. If anyone tells you that you can’t do something, use it as motivation.”

Perkins is appreciative of having amazing male role models that are supportive.

“I’ve learned that doubters come with being a good athlete,” Perkins said. “Lead by example, keep a positive attitude. You never know who's watching.”

Perkins explains who he patterns his mentality after.

“I look up to my big brother Micah and Cam Newton because they both play my position and they are knowledgeable about the game of football,” Perkins said.

Perkins lists history and science as his favorite subjects in school.

“My dream college is LSU,” Perkins said. “My mom went there and they have a good football program.”

Perkins is striving for greatness in all that he does.

“My goals on and off the field are to work hard, push myself and continue to be a leader to my teammates and little cousins who are watching me,” Perkins said. “My biggest goal is to make it to the NFL. That will be a big accomplishment because I love football.”