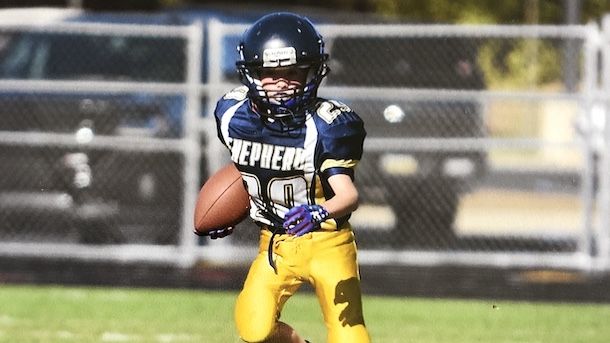 Among the standout youth athletes from the state of Michigan is 2025 RB/DB Christopher Crockett. The Shepherd, Michigan native recently won the MVP award at the NextGen Michigan Showcase, after putting on a stellar performance that caught the attention of the coaches running the event.

When asked what winning the MVP award says about him as an athlete Crockett said, "That I prepared and I’m determined to keep moving forward."

Standing at 4'5" 75 lbs, Crockett is a speedy athlete with loads of potential. He loves to compete and thrives on showing off his ability on the field.

"Not scared of contact and knowing my job on the field," Crockett said of his strengths on the football field.

Crockett has recently played with Michigan Made 7v7 and CE Stars 7v7.

"I’ve been playing 7v7 and I train with Vince Agnew NFL/CFL veteran and I just recently started training with Chris Evans and playing 7v7 as a QB to learn more of the game," Crockett said.

"I work hard and just worked hard for those 3 hours at camp," Crockett said.

"[My favorite part of the showcase was] 1 on 1’s when I shook guy out of his boots," he added.

In addition to being named as an MVP at the Showcase, Crockett also received a golden ticket invitation to NextGen's invite-only main event, The Show. This will be Crockett's first opportunity to participate in The Show.

The Show is a one of the top youth football events of the year. Being selected to compete alongside the nation's top youth athletes is an honor.

"There was a lot of athletes there and to be chosen was amazing," Crockett said.

As he looks to continue his progression as an athlete Crockett knows he has a ton of room for growth.

"Everything. I can improve in all areas of the game," Crockett said.

"Understanding the concepts of the offense and defense. Learning the X’s and O’s of game," he added.

2025 RB/DB Christopher Crockett is ready to ball out at NextGen's The Show this June, which takes place at the IMG Academy in Florida. If his performance at the NextGen Michigan Showcase is an indication of what to expect, look for Crockett to put on another standout performance.