2024’s Clourid Johnson Jr. is one of the most clutch signal callers in Texas | Youth1
Skip to main content

2024’s Clourid Johnson Jr. is one of the most clutch signal callers in Texas

2024’s Clourid Johnson Jr. is one of the most clutch signal callers in Texas 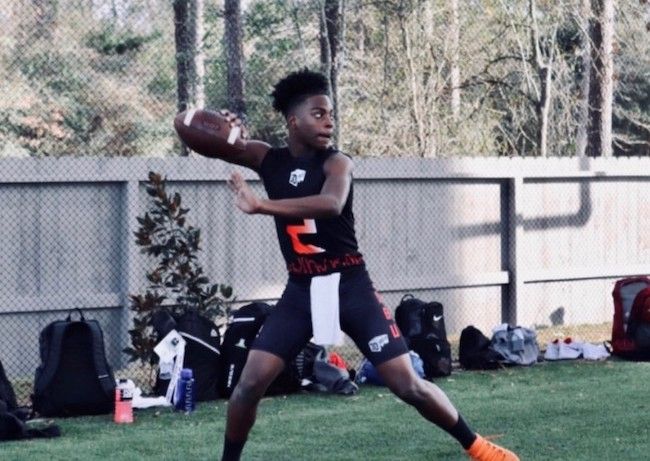 Clourid Johnson Jr. is one of the best players from the Spring, TX area in the Class of 2024.

The 5-foot-9, 146-pound Johnson Jr., who attends Twin Creeks Middle School, is a dynamic player that works as a quarterback and ATH.

Johnson Jr. has earned plenty of recognition during his career, such as: Heisman Trophy winner, MVP, All-American Player of the Game and Houston All-Star Showcase participant.

Johnson Jr. is humbled by the accolades.

“These are good accomplishments and were fun and great learning experiences. I am definitely trying to do bigger and better things in my future,” Johnson Jr. said. “I was able to learn a lot, meet a lot of new friends and it was fun.”

No matter the opponent, every game Johnson Jr. is determined to give it his all.

Johnson Jr. is going all out.

The motor is always at full throttle whenever Johnson Jr. steps between the lines.

“My mindset is to be a leader,” Johnson Jr. said.

Johnson Jr. has great passion and energy whenever he’s on the field. Johnson Jr. tells why he enjoys the game of football so much.

“I love the freedom of hitting somebody as hard as you want and you don’t get in trouble for it,” Johnson Jr. said.

Johnson Jr. has learned many valuable lessons from playing football that he applies to his everyday life.

“I’ve learned the more effort you put into something, the more you will receive,”Johnson Jr. said.

Johnson Jr. takes his role as one of the leaders on the team very seriously. Johnson Jr. makes sure he’s a daily positive influence on his peers.

“I feel as though I am a good teammate, leader and I always have my teammates back,” Johnson Jr. said. “The best advice I give is to have a next-play mentality.”

Johnson Jr. is appreciative of having amazing male role models that are supportive.

“I’ve learned being respectful and responsible can take you a long way,” Johnson Jr. said. “The best advice I’ve gotten is to keep my head up because whenever my head is down, I can affect the players on my team.”

Johnson Jr. patterns his mentality after this standout.

“Russell Wilson because I feel like my game is based around him,” Johnson said. “He seems so down to earth and like a good person on and off the field.”

Johnson Jr. lists math as his favorite subject in school.

“My dream school is LSU because I like the coaching and their facilities,” Johnson Jr. said.

Johnson Jr. is striving for greatness in all that he does.

“I want to be the best me possible,” Johnson Jr. said.