2023’s LaCory Walker wants to be the next Richard Sherman

2023’s LaCory Walker wants to be the next Richard Sherman 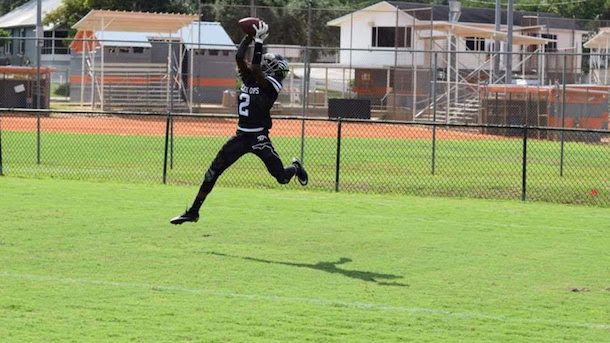 LaCory Walker is one of the best players from the Orlando, FL area in the Class of 2023.

The 5-foot-7, 115-pound Walker, who attends Neptune Middle School, is a dynamic player that works on both sides of the ball as a wide receiver and defensive back.

Walker, who has played for the Osceola Panthers and  Inbound Warriors, has earned plenty of recognition during his outstanding youth career, such as:  2017 FSYFL 8-on-8 All-Star and Ruff N Rukkus Fundamentals Football Camp eighth grade Defensive Backs MVP.

Walker is humbled by the accolades.

“It’s really showing me that all my hard work is paying off. The grind that I’ve been putting in has been all worth it,” Walker said. “It was a very fun experience to compete in the All-Star game against the best of the best from my area.”

No matter the opponent, on each snap Walker is determined to give it his all.

Walker is going all out.

The motor is always at full throttle whenever Walker steps between the lines.

“I have to do my job, because I don’t have any help on the outside when playing cornerback and when at receiver, I have to block and run a good route,” Walker said.

Walker has great passion and energy whenever he’s on the gridiron. Walker tells why he enjoys the game of football so much.

“It’s physical and playing football makes you tougher. Not just as a player but as a person. It makes you grow as an individual,” Walker said. “Football is a sport that you can show your emotions in a positive way.”

Walker has learned many valuable lessons from playing football that he applies to his everyday life.

“Playing football has taught so much about life in general,” Walker said. “It’s taught me to always work hard in life and when you get knocked down, get right back up.”

“My favorite memory of playing football is winning the Florida Elite Super Bowl,” Walker said.  “It was a special memory that I’m never going to forget.”

LaCory Walker Sr. is in his eighth season coaching his son for the Osceola Panthers and Inbound Warriors.

Mr. Walker explains the best parts of his son’s game.

“As a DB he tackles well in the open field. As a wide receiver he runs good routes. He’s very versatile and the opposition always has to be aware of him on both sides of the field,” Mr. Walker said. “He also is very fundamentally sound. He puts himself in the best position to make plays at all times.”

Walker takes his role as one of the leaders on the team very seriously. Walker makes sure he’s a daily positive influence on his peers.

“I do my best to be a good teammate by picking anyone up whenever they’re down,” Walker said. “I tell my teammates to never give up on a play and always listen to what your coaches have to say.”

Mr. Walker adds that his son is one of those consummate teammates that every squad needs to be successful.

“He’s a great leader. He’s a lead by example type of player.  He motivates his teammates to work hard and never give up,” Mr. Walker said. “That’s  contagious to his peers.”

Walker is appreciative of having amazing male role models that are supportive.

“I’ve learned many things from my coaches about being a better player and person,” Walker said. “They tell me to always pay attention because you never know who’s watching you. Always work hard on and off the field.”

Mr. Walker is an advocate of his son’s capabilities.

In addition to making clutch plays, Walker also has a high level of football IQ as well.

Walker has excellent football awareness that puts him in position to thrive.

“He usually out thinks his opponent to put himself in a good position of play,” Mr. Walker said. “He’s always one step ahead of the opposition. That’s because of his study habits.”

Walker is on the grind to perfect and hone his craft in any way possible.

“He is a hard worker that conditions a lot and now he’s getting into watching film for each position,” Mr. Walker said. “This is going to make him even more effective going forward.”

Mr. Walker explains why he compares his son to this player.

“I compare him to Joe Haden due to him being a good tackler as a defensive back,” Mr. Walker said. “He has the same tools and skill set as him so that’s a good player for him to emulate.”

Walker patterns his style of play after this player.

“Richard Sherman because he’s aggressive and he’s smart,” Walker said. “That’s the way I try to play when I’m on the field.”

Walker is constantly striving for greatness in everything that he does.

Walker has his sights set on becoming a Miami Hurricane.

“That’s my favorite college team and it’s also in Florida,” Walker said. “It would be an honor to continue the tradition at The U and wear the turnover chain.”

Walker lists art as his favorite subject in school.

“Drawing is one of my hobbies and art allows me to be creative,” Walker said. “It’s a way for me to express myself.”

Mr. Walker outlines the next areas of improvement for his son.

“Areas of improvement that we’re working on is man-to-man coverage, and high pointing the pass,” Mr. Walker said. “He can get better at those things by competing more in practice and continuing to participate in football camps.”

Mr. Walker believes the sky is the limit as long as his son continues to stay hungry.

“In my opinion his potential is very high because he plays bigger than he actually is and when grows he’ll really be a good football player,” Mr. Walker said.