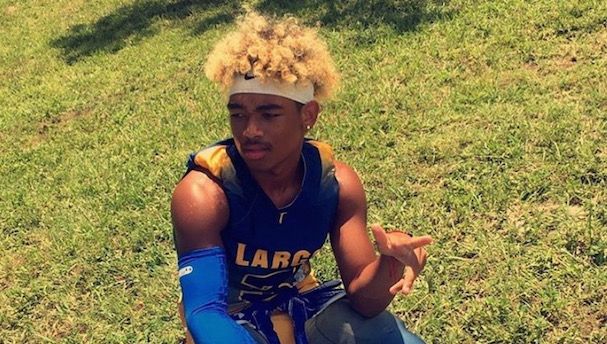 Eric Triplett is one of the best players from the Tampa, FL area in the Class of 2023.

The 5-foot-6, 140-pound Triplett, who attends Pinellas Park Middle, is a dynamic player that works on both sides of the ball as a running back, wide receiver, cornerback and safety.

Triplett, who plays for the Largo Jr. Packers, has earned plenty of recognition during his outstanding youth career, such as winning MVP,  being a Heisman runner up, has been selected in the top 100 of Florida and having been asked to play for seven different all-star teams this year.

Triplett is humbled by the accolades.

“Receiving those awards only pushes me harder to strive further than the rest,” Triplett said. “Playing in the All-Star games has helped me with my positions by showing me that there’s other people just as strong and just as fast, so each year I need to up my game.”

No matter the opponent, on each snap Triplett is determined to give it his all.

Triplett is going all out.

The motor is always at full throttle whenever Triplett steps between the lines.

“My mindset when I’m in the backfield is that no one can stop me but me,” Triplett said. “I want to make the opponent have to work for everything they get.”

Triplett has great passion and energy whenever he’s on the gridiron. Triplett tells why he enjoys the game of football so much.

“The thing I love most about football is the bond and trust me and my teammates get to build,” Triplett said. “My teammates are like my brothers and there’s nothing like being in the locker room with them after a win.”

Triplett has learned many valuable lessons from playing football that he applies to his everyday life.

“Football has taught me so much about life in general,” Triplett said. “Playing football has taught me that plenty of things in life are going to knock you on your face and it’s up to you if you want to stay down and complain or get back up and show that nothing is going to make you quit.”

“My favorite memory of football was the game I rushed for 140 yards with three touchdowns and only had seven carries along with a kick return,” Triplett said. “That game kind of woke me up with how I can be a beast if I put my mind to it.”

Eric Triplett Sr. has coached his grandson for one year with the Largo Jr. Packers.

Mr. Triplett explains the best parts of his grandson’s game.

“At RB, his speed and vision and at receiver speed and route running. He's always trying to improve his footwork and release off the line. He also plays safety and CB on defense where he has speed and ball hawking skills,” Mr. Triplett said.

Triplett takes his role as one of the leaders on the team very seriously. Triplett makes sure he’s a daily positive influence on his peers.

“I demonstrate being a good teammate by constantly reminding my team as long as we stay together and play our game we are untouchable,” Triplett said. “The best advice I’ve ever given a teammate was to not worry about being the next someone, focus on being the first you.”

Mr. Triplett adds that his grandson is one of those consummate teammates that every squad needs to be successful.

“His leadership is demonstrated by working hard in drills and having a positive attitude at all times,” Mr. Triplett said. “That kind of behavior is contagious to the rest of his peers and it rubs off on them.”

Triplett is appreciative of having amazing male role models that are supportive.

“What all of my coaches have taught me is that in order to play football you have to have tough skin because there’s always going to be someone that tries to get you out of your game,” Triplett said. “The best advice a coach has given me is from Coach D when he told me to don’t be afraid to be a star.”

Mr. Triplett is an advocate of his grandson’s capabilities.

“He made big plays on offense and defense. He scored 22 TDs and all were long runs and one pick-six and three more picks this year,” Mr. Triplett said. “We wouldn’t have the success we had without his contributions.”

In addition to making clutch plays, Triplett also has a high level of football IQ as well.

Triplett has excellent football awareness that puts him in position to thrive.

“He has a 3.9 GPA  which carries to the field of play. He reacts to what he sees with his instincts,” Mr. Triplett said. “He’s a very smart player that always puts himself in a position to be successful on the field.”

Triplett is on the grind to perfect and hone his craft in any way possible.

“He trains hard to be the best with push ups and running three flights of stairs when he's  home and works the roads,” Triplett said. “He really has a will to want to be great.”

Mr. Triplett explains why he compares his grandson to these players.

“He reminds me of Marshall Faulk because he’s a do everything RB,” Mr. Triplett said. “He’s like Steve Smith at receiver because he is very physical and he’s similar in style at safety to Kenny Easley.”

Triplett patterns his mentality after this standout.

“My favorite player in the NFL is Odell Beckham Jr. because of the respect other players give him on the field and the way people look up to him off the field,” Triplett said.

Triplett is constantly striving for greatness in everything that he does.

“My goal on the field is to be a 3-time Super Bowl winner along with being the best player that ever stepped foot in the NFL. A lot of people say that they want to be the best but never want to put in the work. I would like to be different,” Triplett said. “My goal off the field is to have a facility built to where all kids of gender and color could go to play sports, receive the academic help they need and train for sports they’re participating in. I also want to be selected into the hall of fame as the best running back in football history.”

Triplett has his sights set on becoming a member of the Alabama Crimson Tide.

“Since I was four I dreamed of going to the best college and being the best scholar/player to ever come out of Alabama,” Triplett said.

Triplett lists math as his favorite subject in school.

“It’s important because if I don’t have math then I won’t be able to budget right,” Triplett said.

Mr. Triplett outlines the areas of improvement that will take his grandson to the next level.

“We work on confidence in his abilities and tell him to don't be afraid to be the best on the field and to have the attitude of believing in yourself,” Mr. Triplett said.

Mr. Triplett believes the sky is the limit as long as his grandson continues to stay hungry.

“At 15 only four years in he is learning every day with new skills to add to the package,” Mr. Triplett said.