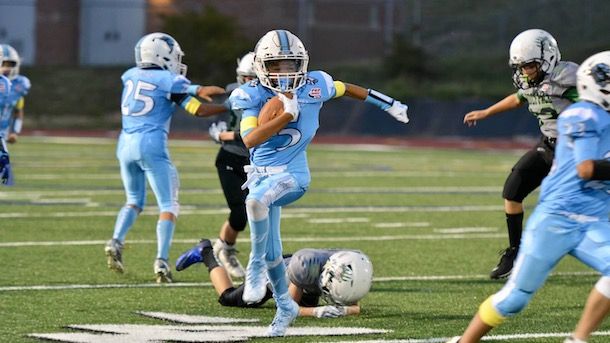 2023 WR KJ Smedley is riding high thanks to being selected for the nation's largest youth football showcase, The Show, which is hosted by NextGen All America Camp. He'll look to fly even higher as he's set to face other elite youth football talent at the event.

“It was a very accomplished and proud feeling that I received an invite,” he recalled. “As one of the first wide receivers selected at the Las Vegas Regional Camp, it just goes to show that hard work really pays off. Many thanks to my family and my trainers who got me ready for the event!”

The 5’10”, 128-lb. athlete from Monument, Col., started as a defensive back playing for the Lewis Palmer Middle School Patriots, but he now prefers the position he’ll play in The Show.

“As a wide receiver, I really enjoy the competition that comes with the position,” Smedley said. “The ability to run precise routes to beat a defender is very appealing to me, and my performance at this position can help elevate my team to a win.”

And in true “it takes a thief to catch a thief” fashion, he also takes great pleasure when playing defensive back.

“As a DB, I really enjoy the strategy it takes to defeat a receiver. To take a receiver out of his route or make him an insignificant part of the offensive game plan is also very rewarding," Smedley said.

"I also enjoy making an impact in defensive run support. I love the ability to stop each and every play that the offense tries to run outside the tackles. Run stoppage is equally as important as pass coverage, and technique is everything at the DB position," he added.

In regard to his football development, he said, “I feel that I have continuously progressed each and every year as a football player. I am finally growing in height and stature, which will make me a tougher challenge for DBs that go up against me. I have grown about 3 1/2 inches since the end of football season, and I am continuously working on my route running, defensive reads pre-snap and being physical at the line of scrimmage to prevent from being jammed.”

Smedley is also a student of the game, watching game film to ready himself for an opponent.

“I enjoy the preparation that goes into each and every opponent that we face,” he said. “Game film provides me an added advantage when it comes to executing on game day. Knowing your opponent and knowing their strengths and weaknesses before we even step on the field is very intriguing to me."

His hard work and game preparation have been paying off.

Prior to being selected for The Show, Smedley has been awarded a 2018 FBU Top Gun All Defensive Team Selection (DB) – Rock Hill, S.C.; USA Football National Team Selection (for four years); and FBU Top Gun Selection (three Years) – RB/WR and DB. His biggest game was playing for the Patriots, when he racked up 258 all-purpose yards against Eagleview Middle School, with an 85-yard TD, 93-yard TD, three 15-yard receptions and 35 rushing yards.

Smedley is also a top student, with a 3.95 GPA and earning a 2018 Lewis Palmer Middle School Patriot Award Winner for Academic Excellence.

While the student-athlete has performed against top national talent in the past, he’s more than ready to finally show off his talent at The Show.

“Unfortunately, I was unable to attend the Dallas Regional last year because of my Middle School District Track and Field Championships,” he noted. “I am really looking forward to competing against some of the top athletes across the country. This will serve as a benchmark on how well I can compete at the next level. I want to be one of the top WRs/DBs in the 2023 Class, and The Show will serve as a platform to elevate my game in preparation for high school.

“I cherish each and every opportunity to compete at the highest level, and I want to see how I fair against some of the top talent in the country,” he continued. “Only then can you take your game to the next level.”

Look for Smedley to fly high toward the next level at The Show.

For more on KJ Smedley, check out his Youth1 Player Profile -> here.