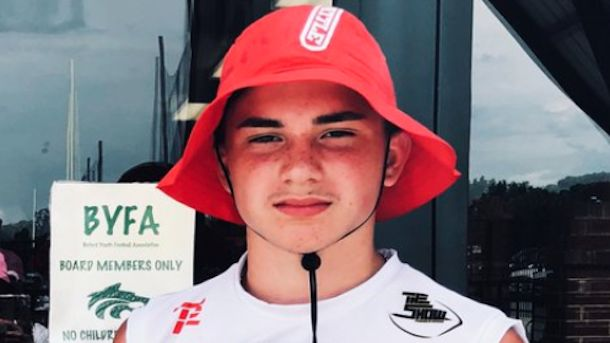 The 2023 class is full of playmakers on the football field. Athletes that thrive in open space with the ball in their arms are the type of athletes that make football so exhilarating at times.

Among the most explosive playmakers from the 2023 class is RB/LB Dominic DeLuzio, who's building a reputation for his ability to takeover a game.

DeLuzio came in at the #56 spot on Youth1's recent Elite101 rankings.

Standing 5'10" 160 lbs., DeLuzio is a terror with the ball in his hands. Give him the ball in some space and he'll turn into a big play more times than not. His speed is next level, and it allows him to turn what looks like a small gain into a long run.

"My opponents say that I am very tough to stop. That I am “explosive”, “powerful” and “super fast” especially off the line. I have great vision of the field, can find the hole quickly," DeLuzio said of his strengths on the field.

"Most of my runs are for big yards; I have the ability to take it all the way to the end zone every time the ball is in my hands. My training as a wrestler definitely helps me on both offense and defense with great balance and agility," he added.

Not many backs at his age hit the hole harder than DeLuzio does. His acceleration is off the charts. Once he gets the ball it takes no time for DeLuzio to get into his fastest gear. He doesn't even have to use a ton of jukes and misdirection moves to find room to run, he'll just use his stellar speed to blow by the defenders.

The truth is DeLuzio's talent allows him to shine all over the field, including offense, defense, and special teams.

"I play all sides of the ball. Running back, Middle Linebacker and Kick Returner. I love to outrun, overpower and outplay my opponents," DeLuzio said.

"As a linebacker I am known for my super hard hitting and my ability to make the play regardless of where I am on the field and as a kick off returner I love to take it all the way down the field for a touchdown," he added.

The Kunkletown, PA native is in the midst of an impressive season. In one of his more recent games DeLuzio put up 5 touchdowns, 242 rushing yards, 105 receiving yards, 11 tackles, and topped things off with a pick-6.

He has over 1000 yards and 20 touchdowns so far this season for the Pleasant Valley Bears Middle School team.

"This 1000 yard stat was a big goal for me and I’m even more excited to have hit it by mid-season," DeLuzio said.

DeLuzio's talent has allowed him to be invited to participate in elite youth football events like NextGen's The Show.

For DeLuzio it's not about the accolades or the glory, it's about the brotherhood.

"My favorite part is of playing football is the brotherhood. My teammates are like my brothers. We not only compete together but have a lot of fun together," DeLuzio said.

As he strives to improve day in and day out, DeLuzio is focused on taking his game to the next level.

"I am lifting weights, running hills and doing body resistance training to increase my strength, speed, endurance and explosiveness. What is unique about me is I that I don’t only lift weights I do TONS of push ups (at least 100 a day)," DeLuzio said.

"I am going to continue to train to get bigger, faster and stronger. I put on 30 pounds of muscle last year in the off season by training hard. I plan to do the same again this year while continuing to increase my speed," he added.

2023 RB/LB Dominic DeLuzio is one of the elite playmakers from his class. His ability to make game-changing plays from all sides of the ball makes him a tantalizing talent. With his level of dedication to his craft, the sky is limit from here.

Just know that DeLuzio is working to become to the best player he can be,

"I feel like I’m getting better every single day. I practice like I play.; 100% effort," DeLuzio said.

"I’m also challenging myself and improving in the offseason by playing with and against the best kids in the country at football showcases and all-american events. I work hard with weight and strength training and participate in speed and agility camp in the summer."

For more on Dominic DeLuzio, check out his Youth1 Player Profile -> here.