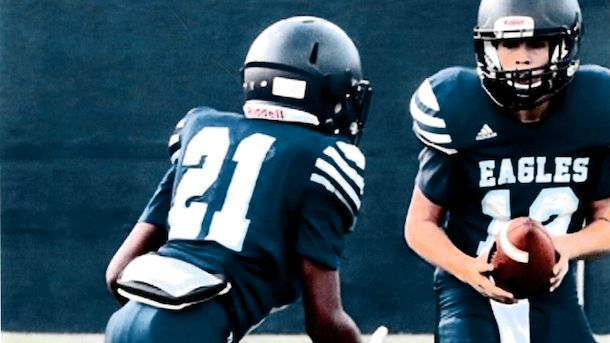 Aidan Canzater is one of the best players from the Chapin, SC area in the Class of 2023.

The 5-foot-7, 145-pound Canzater, who attends Chapin Middle School, is a dynamic player that works as a running back and outside linebacker.

Canzater recently earned an invitation to participate in NextGen's invite-only main event, The Show based on his stellar showing at the NextGen Atlanta Regional Showcase.

“Receiving an invite was very exciting for my family and me because we have never done anything like this before,” Canzater said. “We heard The Show in 2018 had over 90,000 people attending to watch the top athletes in the country.”

This will be Canzater’s first time competing at The Show and he’s excited to leave a positive impression.

“I’m looking forward to getting better as a ball player and with this new experience,” Canzater said. “I know being a part of The Show is going to inspire me to reach new heights as a football player.”

“My ability to read holes and be patient behind the line during zone running plays,” Canzater said. “I’m not focused on making home run plays. I’m willing to take my time and follow my blockers.”

Canzater explains why he’s drawn to the running back and outside linebacker positions.

“The things I enjoy the most about these positions are the reads that you have to make every time a play starts,” Canzater said. “I also enjoy getting to tackle or truck someone and showing my dominance.”

Canzater has great passion and energy whenever he’s on the gridiron. Canzater tells why he enjoys the game of football so much.

“My favorite part of playing football is getting to playing late in the fourth quarter when the game is tied,” Canzater said.

Canzater is pleased with his progress but refuses to allow complacency to set in. Canzater is on the grind to perfect and hone his craft in any way possible.

“I am working to improve my agility and footwork. I also want to work on increasing my speed,” Canzater said. “I feel like I’ve become better in every category and skill level of a young running back. I’ve gotten faster, stronger and have progressed in my receiving game.”

Canzater is attending Dabo Swinney’s football camp in June and Will Muschamp’s camp in July.

Canzater is inspired by this Super Bowl champion.

“I really look up to Russell Wilson because even though people doubted his talent because he is short, he went on to win Super Bowl XLVIII,” Canzater said. “He also gives back to the community by visiting sick children in the hospital.”

Canzater is ready to seize the moment and make a name for himself at The Show.

“This shows me I’m better than the average football player and I can compete at the next level,” Canzater said. “I’m excited to compete against the best of the best and prove that I belong out there.