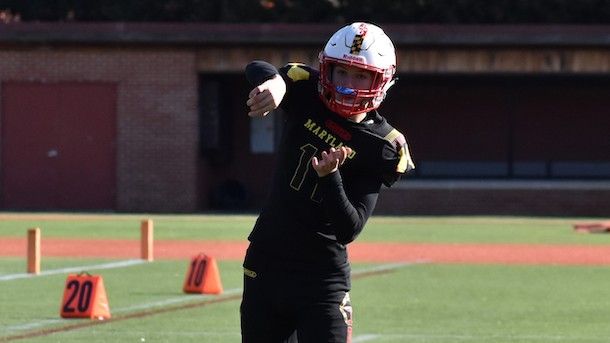 Matthew Parker of Middletown, Del., is making his second consecutive trip to NextGen’s The Show in June, and it’s easy to see why: He’s a duel threat by air or land. The 6’1”, 165-lb. quarterback is a strong-armed passer with accuracy, pocket presence and zips down the field when he takes off on a run. His on-field accomplishments have earned him the nickname “Matty Ice,” and the 2023 athlete is happy to be picked for a return appearance.

“I felt honored, knowing that not many QBs get invited,” he said. “Being invited to The Show shows that I can complete and am a top player in the country. Knowing that it is national and only select players are invited puts those with invites in an elite group. Knowing that I am part of that group allows me to be proud of all my hard work and dedication.

“I always like to see the talent I’m going up against so I can learn from others,” he added. “Seeing their strengths and weaknesses only helps me as a player.”

Parker’s talent has earned him plenty of success on the football field. He was the QB of the following teams: the Spring 2018 Champion 302 Elite Jags in the Metro Maryland Football Alliance and the Fall 2018 Champion Maryland Heat in the Grassroots Youth Football League. He was also an FBU Top Gun participant 2018; a 302 Elite All Star Game Offensive MBP 2018; the TB12 Challenge MVP at NextGen Baltimore; starting QB for DMV Elite All Stars vs Texas All Stars; selected in the Youth1 Elite 101 rankings; and more.

While Parker models himself after Tom Brady—“One reason is his consistency and ability to maintain composure when under pressure.,” he said—but while watching his highlight video you’ll be reminded of another scrambling gunslinger named Aaron Rogers. He dodges and ducks defenders while running, but he also fires off rockets with ease. And like those big-time QBs, Parker also enjoys being a field general.

“I like being a team leader and the pressure that comes with it,” he noted.

It takes a lot of hard work to be a success on the field as well as the classroom—and he has a 3.5 GPA at the Alfred G Waters Middle School in Middletown, making him a top student-athlete, as well.

Starting this month, Parker will be participating in a spring camp at Gilman High School in Baltimore, MD. He will also have routine workouts with a development coach to prepare for The Show and beyond.

Parker says that his accuracy, arm strength, leadership, ability to read the field and drop depth are some of his strengths, but he notes, “I will continue to work on all aspects of the game to help me get to the next level.”

If his past success is any indication, look for Matty Ice to take things at The Show to the next level.

For more on Matthew Parker, check out his Youth1 Player Profile -> here.