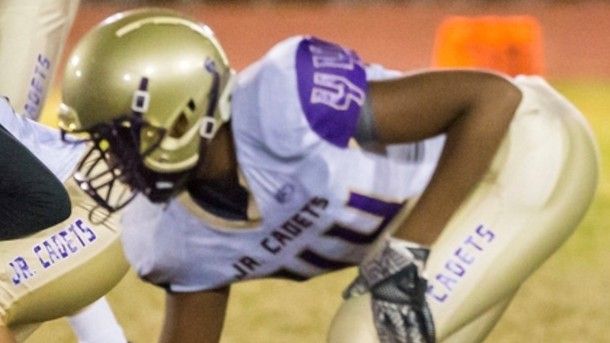 St. Louis, Mo.’s Tyler Gant knew that it wouldn’t be easy to make it to NextGen’s The Show, but the big, playmaking defensive end earned a spot thanks to his talent, drive and the support of his family.

“I was very excited to get an invite to The Show,” he declared. “I knew it would be tough because I was an eighth grader going against highs schoolers who were very good. My dad kept telling me it was more about competing and going back for more. I feel like that attitude showed up at the Regionals in Detroit and allowed me to receive the invite to The Show. I literally yelled and pointed up to God!”

The 2023 athlete played for St. Louis’ undefeated CBC Jr. Cadets and was also part of the U-14 Stripes in the U.S. National Team Middle School Bowl Game Series, but this is his first time playing in The Show, and he can’t wait.

“I am looking forward to seeing how I react to even more pressure, since there will be kids from all across the country,” he said. “Regardless of what happens, I am going to leave a better player, which is what’s most important.

“There are a number of players from the St. Louis region who are going to Florida, so we always like to see where we stack up against national competition,” he added. “We have a lot of pride coming from St. Louis, so we are ready.”

Much like NFL defensive juggernauts Aaron Donald or Joey Bosa, Gant uses his size (6’1”, 220 lbs.) and speed to stop plays in the backfield or rack up QB sacks.

“I enjoy attacking the ball,” he said. “It doesn’t matter if the quarterback or running back has it, making plays in the backfield gets me hype.”

Gant also excels at playing tight end. When he’s not helping pave the way for running backs with his ferocious blocking, he’s a pass-catching threat. His speed, route running and hands make him a receiving asset. “A lot of people look at me like I am just a blocker, so when I snag passes it catches them off-guard, which is fun,” he noted.

Gant’s off-field accomplishments are as impressive as football highlight video. He was chosen as a representative of his school, Wydown Middle School, to discuss stereotypes of African-American males to his school’s Board of Education. He's also an ambassador for his school, where he educates faculty on Restorative Circles, which is a teaching technique to discuss critical topics.

When it comes to football, Gant goes above and beyond to improve himself, which will help him on the field and in school.

“I learn something new every day, and I believe it helps me become a more complete football player,” he said. “I don’t mind calling up former coaches and older players who have gone through the same process I am going through now for advice. I control my destiny, so if I put in the work in the classroom and the field, everything will fall into place.”

This year, he’ll be putting in the work when he competes in the U.S. National Football Team Regional camp in Kansas City, Mo., for a chance to make the National Team once more, as well as attending Rivals adizero Combine in St. Louis, and the Elite Football Combine, also held in St. Louis.

Gant is also looking to attend some college camps and hoping for some invites, which should be coming once he displays his talent at The Show.

Check out his Youth1 profile -> here.