2021’s Micah Hayter is an explosive threat on every snap

2021’s Micah Hayter is an explosive threat on every snap 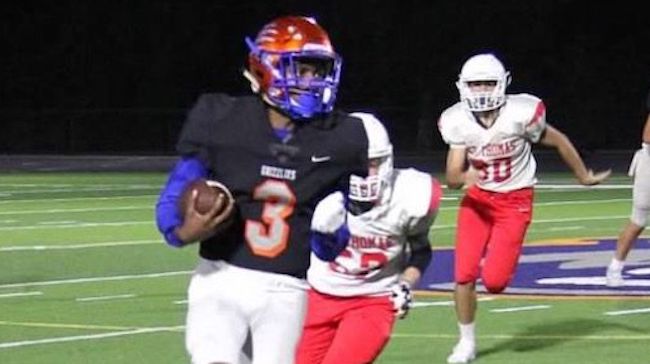 Put yourself in the national spotlight. Click here to order a Youth1 Spotlight Article and share your game with scouts, coaches, athletes and fans across the country.

Micah Hayter is one of the best players from the Spring, TX area in the Class of 2021.

The 5-foot-11, 144-pound Hayter, who attends Grand Oaks High School, is a dynamic player that works as a quarterback. 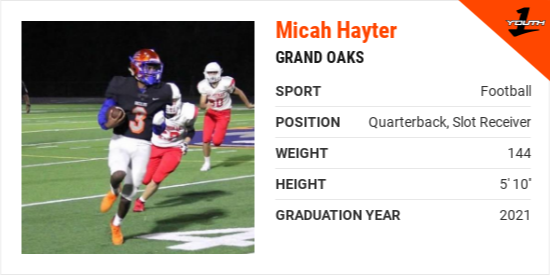 Hayter has earned plenty of recognition during his career, such as: seventh grade MVP and 11th grade Best Athlete Award and Team Leader Award.

Hayter is humbled by the accolades.

“It means a lot to me because I'm a leader and I show it and I show I’m the MVP the moment I step foot on the turf,” Hayter said.

No matter the opponent, every game Hayter is determined to give it his all.

Hayter is going all out.

The motor is always at full throttle whenever Hayter steps between the lines.

“My mindset is to go out and be the best at my position,” Hayter said. “Also, that no one’s better than me.”

Hayter has great passion and energy whenever he’s on the field. Hayter tells why he enjoys the game of football so much.

“I love the excitement of the game,” Hayter said. “I'm a competitor, so I love competing and learning from mistakes and applying it.”

Hayter has learned many valuable lessons from playing football that he applies to his everyday life.

“I’ve learned that anything could happen at any given second,” Hayter said.

“My favorite memory was this past football season. I played kick returner, punt returner and started at quarterback,” Hayter said. “We were playing against Somerville High School. They ran a long touchdown, then all my coaches looked at me and said run the kick return back. Make them pay. So they kicked me the ball and I ran an 86-yard kick return for a touchdown.”

Hayter takes his role as one of the leaders on the team very seriously. Hayter makes sure he’s a daily positive influence on his peers.

“I demonstrate being a good teammate by helping my teammates when they need encouragement, being a leader, having good sportsmanship, having a good attitude with them and not getting frustrated with them when they’re not doing something right,” Hayter said. “The best advice I give is that we win as a team, we lose as a team. No pointing fingers at anyone when we lose.”

Hayter is appreciative of having amazing male role models that are supportive.

“I’ve learned not to get down on myself if I throw an interception, not having a bad attitude,  being a responsible player and a respectable player,” Hayter said.

Hayter patterns his mentality after these standouts.

“I look up to Deshaun Watson and Justin Fields,” Hayter said. “Our playing styles are the same.”

Hayter lists history as his favorite subject in school.

“It gives me information I never knew about the world,” Hayter said.

“My dream colleges are Clemson and LSU because my favorite players went there: Deshaun Watson and Odell Beckham Jr.,” Hayter said.

Hayter is striving for greatness in all that he does.