Elamin Shareef is one of the best players from the Roanoke, VA area in the Class of 2021.

The 5-foot-9, 188-pound Shareef, who attends Roanoke Catholic, is a dynamic player that works as a running back, fullback and middle linebacker. 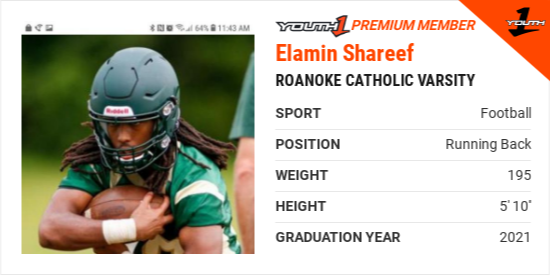 Shareef is humbled by the accolades.

“Not an awards guy but that makes me feel like my hard work isn’t going unnoticed,” Shareef said.

No matter the opponent, every game Shareef is determined to give it his all.

Shareef is going all out.

The motor is always at full throttle whenever Shareef steps between the lines.

“My mindset is that I don’t play around,” Shareef said. “I go hard and I don’t know how to half step.”

Shareef has great passion and energy whenever he’s on the field. Shareef tells why he enjoys the game of football so much.

“I love the comradery with my teammates,” Shareef said.

Shareef has learned many valuable lessons from playing football that he applies to his everyday life.

“Rec travel league in Pigeon Forge, TN because we got to play against the best talent in the US, not just my state and I dominated,” Shareef said.

“As a running back he is a physical runner, has quick feet that allow him to sidestep defenders and run through traffic. He has great vision to see cut-back lanes and holes in tight spaces. He is able to see ways to set up blocks and patient enough to allow the play to develop,” Price said. “As a middle linebacker he takes good pursuit angles and attacks runners going downhill.  He tackles with good form. He reads the plays well and can anticipate where the ball is going.”

“As a running back he has good body position with weight on the front of his feet. He is able to make quick cuts at full speed because he runs low.  He lowers his shoulders and accelerates before contact. He holds the ball tight to his chest to prevent fumbles,” Price said. “As a middle linebacker he has his weight on the front of his feet and his shoulder pads over his knees.  He moves downhill through his gap of responsibility to get the ball. He makes contact below opponents shoulder pads when tackling.

Shareef discusses what separates him from other players.

“Work ethic for sure. I do all I can to contribute to my team where I am needed,” Shareef said. “I also am a good leader and my teammates look up to me.”

Shareef takes his role as one of the leaders on the team very seriously. Shareef makes sure he’s a daily positive influence on his peers.

“I don’t talk very much so when I do my teammates listen. I let my work do the talking. I show up on time, I go hard every time,” Shareef said. “I tell them we are a family and we will only win if we play as a family.”

Price adds that Shareef is one of those consummate teammates that every squad needs to be successful.

“He is quiet and calm at all times.  He plays like a warrior and practices with intensity.  During every practice, he is the hardest working player.  He takes criticism well and is always working to improve. His humility is a great example to the other players,” Price said. “He does not criticize or blame other players when things are not going well.  He never complains about being sore or having injuries and plays through the pain. He does not quit, ever.”

Shareef is appreciative of having amazing male role models that are supportive.

“I learned listening and paying attention helps you grow more than people know.  Don’t give up when things get tough. I have had to share the field with 2-3 good backs since I got to high school, so I learned you have to earn my spot on the field. No one is given anything. You have to earn it,” Shareef said. “The best advice I’ve gotten is to stay humble.”

“He made an over the shoulder, diving catch on a third and long during the playoff game vs. Portsmouth Christian this year,” Price said. “He had a breakaway run on an 80 trap against NSA last year.”

Shareef has excellent awareness that puts him in position to thrive.

“He understands the offense and the blocking assignments which allows him to anticipate holes and set up his blocks.  He uses what he learns from film study to anticipate opponents plays when he is on defense,” Price said. “He is able to play both fullback and wingback on offense as well as middle linebacker and outside linebacker on defense. We have a Wildcat set with him as quarterback.”

Shareef is on the grind to perfect and hone his craft in any way possible. Price loves Shareef’s drive and determination.

“He is the hardest working player on the team. He runs every drill and sprint full speed during practice.  He has one of the highest attendance records for off season workouts. Many of these workouts are at 6:00am before school,” Price said. “He is attentive during practice when installing new plays and/or the defensive play for that week.”

Shareef breaks down an aspect of his game he’s focusing on.

“I need to work on my 40 since I didn’t run track, just starting track this year,” Shareef said. “I want to start faster.”

Shareef is constantly striving for greatness as an athlete.

“I want to graduate with a 3.5 GPA and full athletic scholarship,” Shareef said.

“I don’t like to lose. Losing hurts my heart but I know it is a part of life and it only makes me better for the next chance,” Shareef said. “My family has been through a lot. My goal is to make things better for us all but they push me to just focus on me.”

Shareef patterns his mentality after this running back.

“I look up to Trevor Etienne,” Shareef said. “He isn’t the tallest but he is the strongest back in the league and one of the fastest.”

Shareef lists math as his favorite subject in school.

“I am just good at it. My family says it is hereditary (laughs),” Shareef said

Price lists the improvements that can take Shareef’s  game to the next level.

“He needs to improve his break away speed and he is aware of this aspect of his game.  He plans to change from playing lacrosse to running track in the spring,” Price said. “He will be working with a sprint coach.  He will also be in the weight increasing the strength in his legs.”

Price believes the sky is the limit as long as Shareef continues to stay hungry.

“With his work ethic, strength, athleticism, footwork and continued improvement, he has the potential to play college football at any level,” Price said.