2019’s Maurice Underwood is ready to dominate at Marshall

2019’s Maurice Underwood is ready to dominate at Marshall 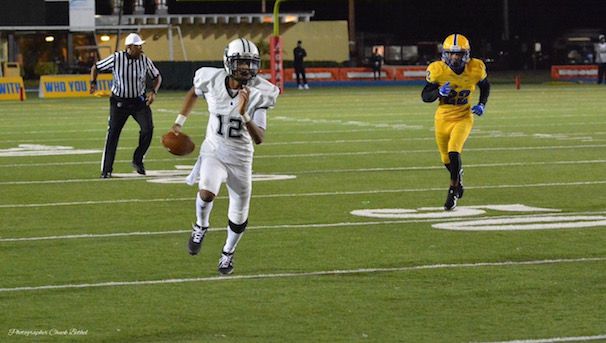 Maurice Underwood is one of the best players from the Miami, FL area in the Class of 2019.

The 6-foot-3, 170-pound Underwood, who attends Miami Central, is a dynamic quarterback that is committed to Marshall.

Underwood played in the Florida vs Georgia All-Star game as an 8th grader, was  in the Top 100 Junior Showcase game and was selected second-team All-Dade as a freshman.

Underwood is humbled by the recognition and the chance to compete against the best of the best.

“It means something big to me. It keeps me hungry and humble,” Underwood said. “It was a great experience playing in the All-Star game with all the top players in Florida. It was good competition.”

No matter the opponent, on each snap Underwood is determined to give it his all.

Underwood is going all out.

The motor is always at full throttle whenever Underwood steps between the lines.

“My mindset at my position is to be a leader by staying focused, calm and patient,” Underwood said.

Underwood has great passion and energy whenever he’s on the gridiron. Underwood tells why he enjoys the game of football so much.

“The thing I love the most about football is that it’s a physical sport and everybody can’t play it and I breathe, eat and sleep it,” Underwood said.

Underwood has learned many valuable lessons from playing football that he applies to his everyday life.

“Playing football taught me a lot about life,” Underwood said. “Because one little football can change your life forever.”

“My favorite memory of playing football is when I scored four times in one game In Pop Warner football,” Underwood said. “To see everyone in the crowd clapping and cheering was awesome. It’s a moment I’ll never forget.”

Baylin Trujillo started personal quarterback training Underwood about a year ago. Trujillo’s first training with Underwood was a 1-on-1 in Miami at Betty T. Ferguson Recreational Park and he knew instantly the quarterback had the tools to be special.

“His strengths are his size, his natural strong arm, and his mobility to move in and out of the pocket,” Trujillo said. “Maurice is very smooth when he escapes the pocket so teaching and training him to stay active within the pocket will make him much more of a dynamic quarterback rather than just being considered a great athlete.”

Underwood takes his role as one of the leaders on the team very seriously. Underwood makes sure he’s a daily positive influence on his peers.

school and outside of school and also on the field,” Underwood said. “The best advice I give my teammates is to stay focus and don’t bring nobody down pick them up when they make a mistake and have short term memory.”

Trujillo raves that Underwood is the consummate teammate that every locker room needs to be successful.

“One of my favorite things about him is his competitiveness and humbleness,” Trujillo said. “The first time I met him was last February at a Adidas 7v7 tourney in which he played for RatPak where I help coach. He was a quiet kid but led by example.”

Underwood is appreciative of having amazing male role models that are supportive.

“I’ve learned a lot from my coaches. They’re preparing me to be a good young mAn for the real world,” Underwood said. “The best advice my coaches give me is everything they say to me about focusing on school and having my priorities in order.”

Trujillo is an advocate of Underwood’s capabilities.

“Maurice is at powerhouse Miami Central High School where the quarterback position has had a big winning tradition. He has already much success playing football at the quarterback position and recently committed to play at Marshall University last August, where former Miami Central QB Mark Cato also played,” Trujillo said. “He hopes to lead Central to another state title this year.”

In addition to making clutch plays, Underwood also has a high level of football IQ as well.

Underwood has excellent football awareness that puts him in position to thrive.

“Maurice is a smart player but will need to take more snaps under center just to get the feel of two styles of offense,” Trujillo said. “Miami is all spread and RPO.”

Underwood is on the grind to perfect and hone his craft in any way possible.

“He’s a very hard working kid that wants to get better at his craft every day,” Trujillo said. “His desire and commitment to excellence can’t be questioned.”

Underwood is constantly striving for greatness in everything that he does.

“My goal on the field is to take my team to states and break records,” Underwood said. “My off the field goal is to move my mother and dad out the hood.”

Underwood grew up as a Miami Hurricanes fan because he “always loved them and it’s home” but is excited to be committed to Marshall.

“Everyone there made me feel really welcomed and like a part of the family,” Underwood said. “I feel like I can step in and be the kind of quarterback that can lead them to victories.”

Underwood lists english as his favorite subject in school.

“It’s something I’m good at,” Underwood said. “It’s a subject that is very interesting and I enjoy reading about new things.”

Trujillo outlines the next areas of improvement that will take Underwood’s game to the next level.

“Maurice is a dual-threat quarterback but during my trainings, I’m focusing on him staying in the pocket and breakdown defenses,” Trujillo said. “He is long and rangy with good feet.”

Trujillo believes the sky is the limit as long as Underwood continues to stay hungry.

“I am blessed as a QB coach to have been a small part in Maurice’s life and I can’t wait to see what he does throughout this senior year and beyond,” Trujillo said.