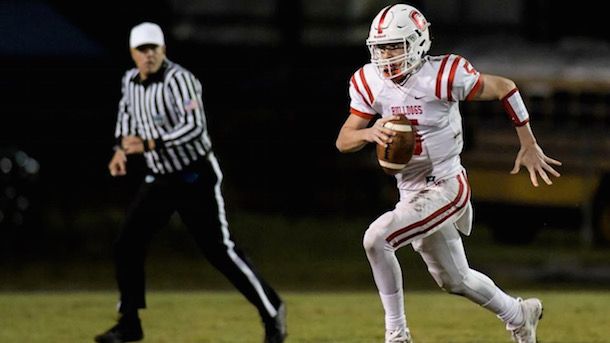 John Gillis is one of the best players from the Crestview, Florida area in the Class of 2019.

The 6-foot-4, 185-pound Gillis, who attends Crestview High School, is a dynamic player that works as a quarterback.

Gillis, who also excels on the baseball field as a pitcher, has received plenty of recognition during his outstanding career, such as being selected to the 2018 Subway All-Star Game.

Gillis is humbled by the accolade and the chance to showcase his skills.

“To be selected to play in an All-Star game is very humbling to me. To me, I work very hard at what i do and to be chosen for that made me feel content with what I did on the field,” Gillis said. “It was fun to get to be around some of the best players in the area and just get to know them. It’s something that I’ll never forget.”

No matter the opponent, on each snap Gillis is determined to give it his all.

Gillis is going all out.

The motor is always at full throttle whenever Gillis steps between the lines.

“My mindset when I step out on the field is get the job done no matter what. Trust the process and execute,” Gillis said “Coaches call the plays and players are the ones supposed to execute them.”

Gillis has great passion and energy whenever he’s on the gridiron. Gillis tells why he enjoys the game of football so much.

“I loved being around my teammates and just getting to interact with them is what has made high school so fun for me,” Gillis said. “I loved the feeling of Friday Night Lights and it's just something that I'll never forget.”

Gillis has learned many valuable lessons from playing football that he applies to his everyday life.

“It has taught me multiple things about life. Playing football has made me the man and athlete I am today,” Gillis said. “It has shaped me into a better baseball player as well. It has taught me to stay mentally tough even when things don't go your way. It's not about how you start, it's how you finish.”

“My favorite memory playing football was beating our rival Niceville High School for the third year in a row to secure a third district championship then making it to the Final Four,” Gillis said.

“John Michael played QB his junior and senior year. The best part about him is that he accepted hard coaching. He has a strong arm and can make any throw on the route tree,” Grant said. “He is a very accurate passer that knows exactly where to place the ball so that only the receiver can catch it.”

Gillis takes his role as one of the leaders on the team very seriously. Gillis makes sure he’s a daily positive influence on his peers.

“As a QB, everyone kind of looks up to you because you are in control of what happens after the ball is snapped. For me, it is about being that teammate that is constantly encouraging to others. When someone messes up a play, you have got to stay within yourself and as the QB reassuring them that they will get it the next play,” Gillis said. “Probably the best advice I've given to my teammates is to keep your head up. You may miss a ball the play before but you've got to be mentally tough and move on from it and be ready to go on the next play.”

Grant adds that Gillis is one of those consummate teammates that every squad needs to be successful.

“John leads by example and came to work hard every single day,” Grant said. “His attitude had a positive effect on his teammates.”

Gillis is appreciative of having amazing male role models that are supportive.

“My coaches are the best in the business. They are the best coaches in our area hands down. Not only are they constantly working with you, they are always there when you need them. Coach Grant and Coach Hatten have molded me into the person I am today and I'm so thankful that I got to play for them. They always pushed me to be my best no matter what,” Gillis said. “The best advice I've got from my coaches is probably to just relax. When you get tensed up, you tend to not do the job to the best of your ability because you are so tense and uptight. If you relax and have some fun, you'll be in a whole lot better shape than you would be if you were scared. They always told me if you mess up, mess up at 100 percent.”

Grant is an advocate of Gillis’ capabilities.

“He threw for 2,800 yards and 26 TDs in nine games,” Grant said. “We wouldn’t have the success we did without his contributions.”

In addition to making clutch plays, Gillis also has a high level of football IQ as well.

Gillis has excellent football awareness that puts him in position to thrive.

“He did a great checking at the line of scrimmage. He used audibles when he recognized mismatches on the field,” Grant said. “He was like an extension of the coaching staff on the field.”

Gillis is on the grind to perfect and hone his craft in any way possible.

“He is always working and learning,” Grant said. “He started his career at wide receiver and moved to QB his junior year to play JV and started four games into his senior year.”

Grant explains why he compares Gillis to this player.

“I would compare him to Nick Foles.” Grant said. “He’s a natural winner and has all the intangibles needed to play the quarterback position.”

Gillis patterns his athletic mentality after this legend.

“My favorite pro athlete is probably Chipper Jones,” Gillis said. “He always played the game right and he was the person that people wanted up to the plate in the clutch.”

Gillis is constantly striving for greatness in everything that he does.

“My goals on the field are to win a state championship obviously but my goal off the field is to be a person that someone can trust and count on. Sports don’t last forever. It all ends one day no matter who you are,” Gillis said. “I plan to obtain my AA after attending Northwest Florida State College for two years on a baseball scholarship. Hopefully after those two years, I can attend a university and hopefully continue playing baseball and obtain my mechanical engineering degree.”

Gillis has aspirations of becoming a Florida Gator.

“My dream college is the University of Florida because I’ve grown up a Gators fan. Every time I go to Gainesville I can see myself going to school there or possibly playing there one day,” Gillis said. “They also have my intended major which is mechanical engineering so that's a plus.”

Gillis lists math as his favorite subject in school.

“I've always been very good at math,” Gillis said. “Most people hate it but it has always been that one thing that clicks with me.”

Grant believes the sky is the limit as long as Gillis continues to stay hungry.

“He was a major contributor to our football team,” Grant said. “I think he will have a great career pitching and we’ll see him in the MLB.”