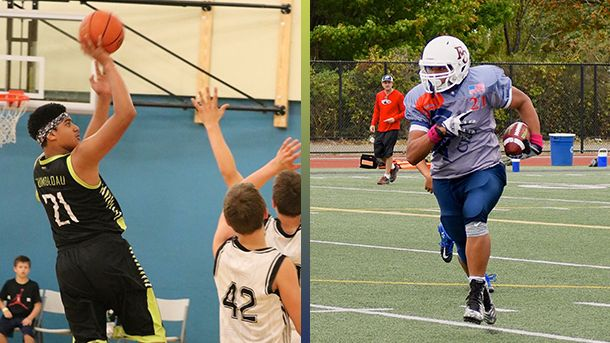 Whether it’s on the basketball court or on the football field, there’s a pattern that Washington's Jaylahn Tuimoloau encounters in every athletic contest.

While that’s the norm when you’re 6-foot-4 and weighing 243 pounds, the Class of 2021 ATH already handles it like a seasoned veteran.

As a DE/DT/TE for football and a center for basketball, Tuimoloau is always in the middle of the action.

Tuimoloau was a part of FBU Seattle during their last two playoff runs and was in the 8th grade FBU Youth All-American bowl.

Tuimoloau, who tries to pattern his game after Cameron Wake and DeMarcus Cousins, finds playing each sport to be beneficial on its own and to complement the other.

FBU Seattle coach Zuri Hector further articulated how basketball has been a positive when
Tuimoloau lines up on the field.

“He’s a kid that plays basketball and because of that he has such good footwork. It translates to the football field,” Hector said. “The kid has great hands and moves well for his size and he’s a great blocker.”

Tuimoloau was instrumental in last season’s FBU playoffs semifinals matchup vs. Team Miami. Tuimoloau came away with a pick-six and also created a pick-six for teammate Shane Nowell off of his tipped ball.

Throughout the contest, Tuimoloau created plenty of chaos for the opposing line, as he accounted for a majority of game-changing plays.

“Most teams had to double team him. We moved him around so it screwed up the offensive line quite a bit because they couldn’t get too comfortable,” Hector said. “Because he had the versatility of moving on the edge or on the interior line, there were points where he was penetrating and creating tipped balls.”

Tuimoloau returned to football after taking two years off  because of the admiration he had for Seattle FBU.

“I told my parents that this was a lot of competition and I wanted to get back into this. To be with the Seattle FBU team and go to the championship twice was a great experience,” Tuimoloau said. “We beat one of the top teams in Florida. It helped me out on and off the field. Whenever I got a sack everyone cheered me on to get another one.”

When Tuimoloau received word of his invite to the FBU All-American Bowl, he couldn’t contain his emotion.

“I broke down crying when I found out,” Tuimoloau said. “This was my goal from last year. I told my dad I wanted to be a part of it and we took extra time to work hard to accomplish it.”

Tuimoloau owes a ton of his development on the defensive side to FBU Seattle coach Sam Adams. The 14-year NFL veteran and three-time Pro Bowl selection took the talented Tuimoloau under his wing and the results have spoken for themselves.

Tuimoloau’s technique and instincts have made him a really effective pass rusher and run stopper.  Adams has helped Tuimoloau fine tune areas such as bull rushing and swim moves.

“He’s unstoppable as a defensive lineman. He was one of Sam’s top guys,” Hector said. “He was like a sponge. Those are the kids that you know are going to be successful on and off the field.”

Tuimoloau had the mental fortitude and perspective to take the instruction and tough love from Adams in stride.

“He would always yell at me and get on me and I would think ‘Why does he do this more than the other kids?’” Tuimoloau asked. “At the end of the game, I realized that it was all for a good reason. it was to help me on and off the field to be a better person.”

Chase Young is Tuimoloau’s coach for the Seattle Select Warriors. Young marveled at the timing and basketball IQ of his center.

“He has great anticipation skills. He has a great feel for the game. On offense and defense he’s always prepared to make a play,” Young said. “He’s usually the first to make the box out and when he goes after that ball, man he’s ferocious.”

Young says Tuimoloau is a student of the game who has made massive strides.

“He’s really been able to utilize his strength by getting wider and lower in his base. His footwork and his balance got tremendously better,” Young said. “Doing a lot of hand quickness drills has allowed him to really catch passes and finish around the basket.”

Tuimoloau in turn credits Coach Young with taking the time with him in the film room to dissect his play.

“He’s really bought into rebounding, securing the ball and making deep outlets passes to get us easy transition buckets,” Young said. “That’s one of the things he’s really gotten better at and takes pride in.”

Tuimoloau is a vocal leader and team energizer in both sports. Players respect and gravitate towards him.

Tuimoloau embraces the responsibility and setting the tone for his teammates.

“I like playing sports because it teaches me how to be a leader,” Tuimoloau said. “I give them advice to keep on pushing and keep on trying.”

Tuimoloau, who is attending Eastside Catholic for high school, has parents which instilled a strong sense of education in him.

“We’ve made sure that he understands school is a priority and sports can be a benefit if he does everything the right way,” His father Ponce Faletoi said. “We’re just trying to create a well-balanced life overall for him.”

Tuimoloau has his sights set on attending a prestigious Pac-12 institution.

“My No. 1 goal is to go to Stanford,” Tuimoloau said. “If football doesn’t work or basketball doesn’t work out, to have good grades and have a good mindset will help you. I want to be a doctor. I have a plan B on what I want do.”

To his coaches, Tuimoloau is the epitome of what a student athlete should be all about.

“He’s very persistent,” Hector added. “He doesn’t mind putting in the time to get better whether it’s academics or sports.”

Everybody that knows Tuimoloau attests that his upside is through the roof and they can’t wait to see what’s next for the standout.

“He’ll be a name to watch in the upcoming years,” Hector said. “Watch out for this kid.”