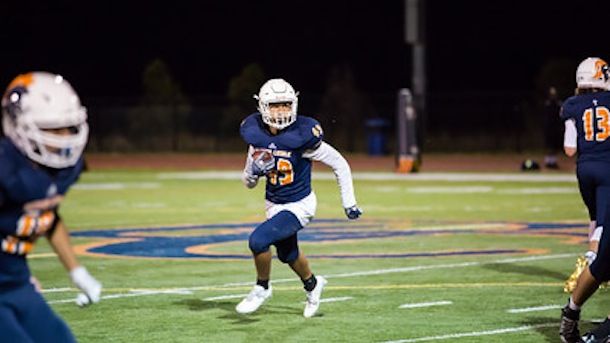 Having a dad that played in the NFL can sometimes bring pressure to a young player.

However for Class of 2020 running back Sam Adams II it’s quite the opposite. The son of 6-foot-3, 350 pound three-time Pro Bowl defensive tackle Sam Adams embraces having the guidance of his dad while carving out his own career.

The 6-foot-2, 193 pound Adams II was coached by his father all the way up through his eighth grade season at Eastside Catholic in Sammamish, WA. Adams II counts his father as his biggest influence in his football career.

“Having him as my coach has made me push forward and made me want to do more even when I thought I couldn’t,” Adams II said. “He pushes me to that next level.”

Adams cherishes the special moments shared with his son on the football field.

“It’s extremely rewarding. I love the sport and I know a lot about it so you want to be able to spend time with your kids and share that with them,” Adams said. “So that’s our thing. I can help them as they navigate through their lives to be ready for any pitfalls that might come their way.”

The elder Adams quipped that he didn’t understand how his son became such an elite running back with a father that played a vastly different position on the gridiron.

“He’s got great vision and he’s a good athlete,” Adams said. “I’m a little dumbfounded about how he became such a good running back because he for sure didn’t get that from me.”

Adams laughs when asked about comparing his son’s personality to his own back in his playing days.

“He is the complete opposite. I would rather tear your head off more than anything,” Adams said. “Sammy is calm and quiet and nice. You would never know that he’s about to get you. All of a sudden he’s running by you and scoring touchdowns.”

Adams II has always been the silent assassin with a mean poker face.

“When he gets on the field he plays hard. He’s not too emotional about anything that happens,” Adams said. “He wants to win but he also understands that ‘I’m going to do the best that I can and try to help my teammates and we’re going to let the chips fall where they may.’”

Adams II is a member of the Freshman 450. In 2015, Adams II was on the FBU 1st team All-Tournament team. He was also a Youth1.com All-Top Gun Honorable Mention Offensive Team.

Adams II explains what he enjoys most about playing football.

“I like the competition. I’m an offensive player so I like running through and around people,” Adams II said. “It’s just a fun game because I’m a very active guy.”

Even though Adams II isn’t very vocal, he lets his actions do the talking as a leader by example.

“My coaches they’ll always talk to me and tell me to trust in my teammates to become a leader,” Adams II said.

Adams II is blessed with the kind of sight and abilities to be a big-time playmaker.

“Sammy’s best part of his game is his vision,” Adams said. “He has an innate ability to see the back side, be able make to the correct cut and hit the hole. He understands how to navigate through the secondary and get to the house.”

Adams II has bulked up by over 40 pounds to withstand the rigors of high school football. He not only works out with his father but also under well-known trainer Tracy Ford at Ford Sports Performance, home to an environment filled with many college and professional athletes.

Adams II does pyrometrics, speed and agility drills and plenty more all with no complaints.

“He’s going to be at about 200 pounds this year,” Adams said. “Sammy doesn’t even view it as work. He’ll do whatever it takes to be successful.”

Adams said his son, who’s been playing since the fourth grade, has used the qualities he’s picked up in football for the betterment of himself.

“He’s a Christian kid and surrounds himself with good people,” Adams said. “I think football has helped mold him into the person he is.”

Adams II grew up around some of his father’s contemporaries such as Ray Lewis, Lawyer Milloy and Warren Moon. The average kid might be awestruck, but to Adams II they were merely his dad’s friends.

“The thing about it is he doesn’t know them from our neighbor,” Adams said. “Those are people that have been in his life so that exposure and his nature makes him a well-grounded young man.”

Adams believes his youngest child doesn’t carry the same burden of having an NFL dad as his two other kids Terin (a cornerback at City College of San Francisco) and Tea (a point guard committed to San Diego State).

“He has no clue. His brother and sister have a lot of pressure. He’s the youngest. He doesn’t get everything that they get. He’s laid back and he tries to stay under the radar,” Adams said. “Everyone knows that his dad plays football but they don’t really remember and he doesn’t really remember. So I don’t think he feels as much pressure as the older two did.”

After a strong freshman campaign playing for the freshman, JV and varsity teams, the rising sophomore Adams II will be competing next year to be the starting running back at Eastside Catholic.

“We’re expecting a great competitive season again in Washington football and hopefully Sammy will be able to contribute to help his team in any way that they need him,” Adams said.

Adams II patterns his game after Arizona Cardinals running back David Johnson, noting that “We have the same running style.”

The intelligent Adams II loves math, as he’s two years ahead of where’s he supposed to be in the subject.

Adams II said he would like to either attend the University of Washington or Texas A&M where his father played collegiately.

Adams II wants the world to know that he’s a player with a non-stop motor and “will go hard at any moment.”

Adams believes West Coast athletes often fly under the radar. However, he believes his son has the will and drive to make his own legacy for himself.

“People look at these Georgia kids and these Texas kids but don’t realize we have great football here,” Adams said. “Sam Adams is a great running back and he’ll be one of the best in the country in his grade.”