2028’s Le’Keith Tyler Jr. is one of the most well-rounded ballers in Texas | Youth1
Skip to main content

2028’s Le’Keith Tyler Jr. is one of the most well-rounded ballers in Texas

2028’s Le’Keith Tyler Jr. is one of the most well-rounded ballers in Texas 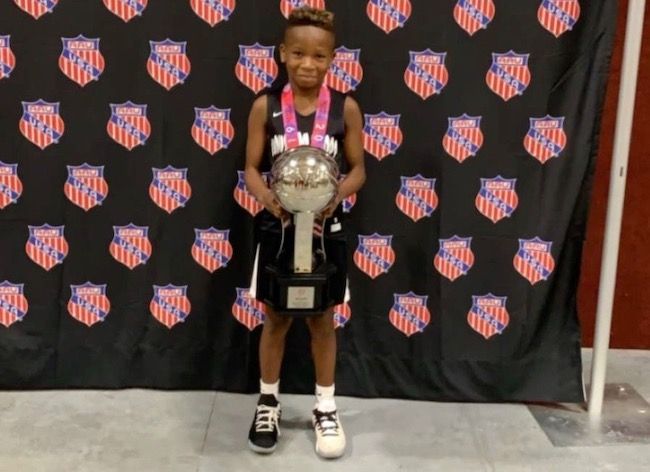 The 4-foot-6, 72-pound Tyler Jr., who attends Parker Elementary, is a dynamic player that works as a shooting guard and small forward.

Tyler Jr. has been a part of teams that placed first in the TAAF state tournament and second in the AAU Nationals.

Tyler Jr. is humbled to have participated on those platforms.

“It made me feel special to know that one of the best NBA players in the world has the same trophy I received,” Tyler Jr. said. “It was a dream that came true. Not only did I get a chance to play at Disney World but we also placed second in the AAU national tournament. That’s the same tournament Lebron James came second in when he played in it.”

No matter the opponent, every game Tyler Jr. is determined to give it his all.

Tyler Jr. is going all out.

The motor is always at full throttle whenever Tyler Jr. steps between the lines.

“My mindset is to be a lockdown defender and playmaker,” Tyler Jr. said. “I want to make an effect on both sides of the ball when I’m on the court and make it hard for the other team.”

Tyler Jr. has great passion and energy whenever he’s on the hardwood. Tyler Jr. tells why he enjoys the game of basketball so much.

“I love to play defense. I’m a big competitor,” Tyler Jr. said. “On my AAU team we travel a lot so I get to see different places and experience playing against all types of talented kids.”

Tyler Jr. has learned many valuable lessons from playing basketball that he applies to his everyday life.

“Playing the game of basketball has taught me a lot about life,” Tyler Jr. said. “It has taught me to never get comfortable and always work hard in whatever I’m trying to do.”

“My favorite memory was in the Juneteenth Shootout tournament,” Tyler Jr. said. “I had a career high of 4 3s in the championship game.”

Christopher Jackson has coached Tyler Jr. for a year and a half.

“The best part of his game at the 2 is when I needed him to get buckets he was able too. Wasn’t afraid to shoot the ball and was very confident in his shot. At the 3 position he was able to create shoots for himself and for his teammates,” Jakcson said. “Here’s a couple of techniques I loved about Keith: A) Stance and balancing himself when shooting. B) His follow through when shooting. C) Love how he grips the ball properly and is ready to shoot. D) Last but not least his release and his landing when shooting.”

Tyler Jr. takes his role as one of the leaders on the team very seriously. Tyler Jr. makes sure he’s a daily positive influence on his peers.

“I try to be a good teammate by not taking plays off and keeping my teammates involved in every play,” Tyler Jr. said. “The best advice I give to my teammates is: 1. Never get down on yourself after a mistake. 2. We have to have a short-term memory. 3. We can always make it up the next play.”

Jackson adds that Tyler Jr. is one of those consummate teammates that every squad needs to be successful.

“He demonstrates great leadership at practice and in games,” Jacksons said. “He’s always giving me 100 percent in everything he does and he makes sure his teammates are doing the same.”

Tyler Jr. is appreciative of having amazing male role models that are supportive.

“My coaches have helped to make me a better player and person on and off the court,” Tyler Jr. said. “My coaches have taught me that hard work pays off. The best advice they give is to give it your all on every play and don’t take any plays off.”

Jackson is an advocate of Tyler Jr.’s capabilities.

“He makes plays whenever I need him to,” Jackson said. “He’s had so many defensive plays I couldn’t even keep count. Any time I needed someone to lock down a player I’ll call on him to do so.”

In addition to making clutch plays, Tyler Jr. also has a high level of basketball IQ as well.

Tyler Jr. has excellent basketball awareness that puts him in position to thrive.

“His IQ of the game is through the roof,” Jackson said. “He just knows when to make the perfect pass or just knows how to set up a ball handler to make a defensive play.”

Tyler Jr. is on the grind to perfect and hone his craft in any way possible.

“His work ethic is like no other. He’s always going to bring the best out of himself,” Jackson said. “Also stays in the gym or with trainers to make sure he stays at a high level.”

Jackson explains why he compares Tyler Jr. to this two-time NBA Finals MVP.

“I would say he reminds me of Kawhi Leonard,” Jackson said. “He’s got the defense and knows how to score when you need him to.”

“I look up to Patrick Beverley,” Tyler Jr. said. “ I like the way how he plays defense and knows how to get in people’s heads.”

Tyler Jr. is constantly striving for greatness in everything that he does.

“My goals are to stay focused and become better at everything I do,” Tyler Jr. said. “I want to make my family proud of me in everything that I do.”

Tyler Jr. has his sights set on attending the University of Alabama.

Tyler Jr. lists math as his favorite subject in school.

“I like adding, subtracting and multiplying,” Tyler Jr. said.

Jackson outlines the areas of improvement that will take Tyler Jr. to the next level.

“I’ll say ball handling and just improving his jump shot a little more because no kid can go wrong at getting better at that,” Jackson said.

Jackson believes the sky is the limit as long as Tyler Jr. continues to stay hungry.

“His potential is high,” Jackson said. “His work ethic, IQ and his love of the game will make it happen for him.”