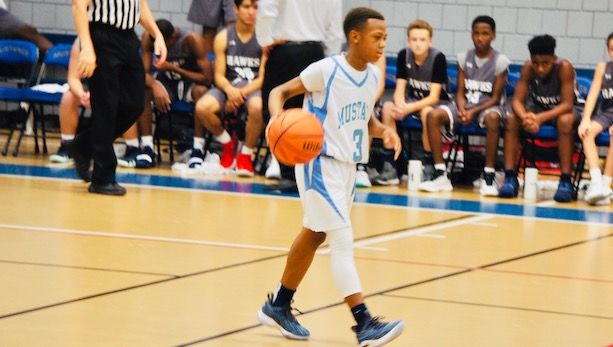 Ryan King is one of the best players from the Houston, Texas area in the Class of 2023.

The 5-foot-4, 120-pound King, who will attend Klein Oak High School, is a dynamic athlete that plays as a point guard and shooting guard for the Texas Footwork Bengals.

King has earned plenty of recognition during his outstanding career, such as being the 2017 League of Our Own Tournament MVP.

King is humbled by the accolade.

“Personal awards are cool but not really that important. I would rather my team win,” King said. “It was great to be recognized for having a good game shooting.”

No matter the opponent, every game King is determined to give it his all.

King is going all out.

The motor is always at full throttle whenever King steps between the lines.

“My mindset is to be aggressive, ready to shoot and space the floor so our big men and work down low,” King said. “I want the opponent to have to grind for everything they get while I’m out there.”

King has great passion and energy whenever he’s on the hardwood.  King tells why he enjoys playing basketball so much.

“The thing I enjoy the most about playing basketball is to be able to see your hard work pay off and to be able to support my teammates,” King said. “Winning is the best feeling. There’s nothing that compares to being in the locker room after a big-time win.”

King has learned many valuable lessons from playing basketball that he applies to his everyday life.

“My first middle school game when I was the high scorer with 16 points in a win against a Hofius team that had a lot of my friends on,” King said. “It was good to get the win and get our season off to a good start.”

Lloyd King is his son’s coach for the Texas Footwork Bengals.

Mr. King explains the best parts of his son’s game on the hardwood.

“As a shooting guard he has gotten better with not letting the defensive closeout disrupt his shot release. At point he's good at reading the defense on ball screens and entry passes into bigs posted up,” Mr. King said. “At shooting guard he's consistent with having his hands ready to catch and shoot.  At point guard he communicates and gets the team into their offensive sets.”

King takes his role as one of the leaders on the team very seriously. King makes sure he’s a daily positive influence on his peers.

“I demonstrate being a good teammate by communicating on the court and off. To point out things I see while on the bench and in the game,” King said. “The best advice that I give is to always work on your skills on your own away from your school or AAU teams. Always do something daily to get better.”

Mr. King adds that his son is one of those consummate teammates that every squad needs to be successful.

“He demonstrates leadership by communicating on and off of the court and encouraging his teammates,” Mr. King said. “This creates a contagious effect on the rest of his teammates.”

King is appreciative of having amazing male role models that are supportive.

“My coaches have helped make me a better player and person on and off the court,” King said. “I have learned that there is always someone somewhere working harder than you are to get what you want. That you should be self-motivated and driven to achieve your goals. To always work on your game, be prepared and focused on your goals and to be a good teammate.”

Mr. King is an advocate of his son’s capabilities.

“During a Vype tournament earlier this year we were down three starters leaving us with six players.  Ryan was inserted as the starter at shooting guard and was able to spread the floor with his three-point shooting,” Mr. King said. “He averaged 10 points with a high game of 14 on the way to winning the 14U championship.”

In addition to making clutch plays, King is developing a high level of basketball IQ as well.

King is growing into excellent basketball awareness that puts him in position to thrive.

“He uses his basketball IQ by moving without the ball against zone 2-3 defenses and being ready to shoot when the ball reverses to the weak side,” Mr. King said. “He’s learning how to make the right choices.”

King is on the grind to perfect and hone his craft in any way possible.

“Ryan works with his shooting coach Karon Bradley in the offseason to increase his skills,” Mr. King said. “On off days he is in the driveway working on the drills during his session to get better.”

Mr. King explains why he compares his son to these players.

“I would compare him to JJ Redick and Klay Thompson because of his shooting ability,” Mr. King said. “At his age level he’s able to shoot the ball very well.”

King patterns his mentality on the court after the two sharp shooters.

“I look up to them because of how they move without the ball and catch and shoot off screens,” King said. “That’s the way I try to stay active and make my opponent work when I’m out there.”

King is constantly striving for greatness in everything that he does.

“I want to be a good teammate and to continue to grow and mature as a young man,” King said. “I want to make my family proud of me in everything that I do as a player and person.”

“My dream college is University of Houston because I am loyal to the soil,” King said. “I would love to stay home and play for Houston. It would be a real honor and I would love to have my family around.”

King lists Theatre Arts as his favorite subject in school.

“It allows me to be creative and expressive,” King said. “It is is a very interesting subject that helps you to express yourself and show creativity.”

Mr. King outlines the areas of improvement that will take his son to the next level on the hardwood.

“We’re continually working on his quickness, explosion and dribbling with his left hand,” Mr. King said.

Mr. King believes the sky is the limit as long as his son continues to stay hungry.

“He has a high upside as he has only been playing basketball for three years and has continued to get better each year,” Mr. King said. “He's a great spot up shooter and already possess great discipline on defense.”