2023’s Darius Hicks wants to take his talents to Clemson

2023’s Darius Hicks wants to take his talents to Clemson 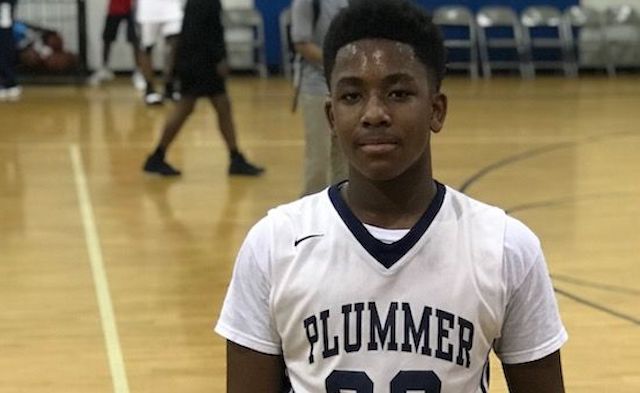 Darius Hicks is one of the best players from the Houston, Texas area in the Class of 2023.

The 6-foot, 167-pound Hicks, who will attend Davis High School, is a dynamic athlete that plays as a small forward and power forward for the Texas Footwork Bengals.

Hicks has earned plenty of recognition during his outstanding career, such as Newcomer of the Year (2016) and Team MVP (2017).

Hicks is humbled by the accolades.

“They mean that if I apply myself enough I can achieve the highest of honors,” Hicks said. “It was a great experience to be around more people my age who are also dedicated to the game.”

No matter the opponent, every game Hicks is determined to give it his all.

Hicks is going all out.

The motor is always at full throttle whenever Hicks steps between the lines.

“My mindset is to bring the physicality and smartness of knowing when and where to be for myself and teammates to succeed ” Hicks said. “I want the opponent to have to grind for everything they get while I’m out there.”

Hicks has great passion and energy whenever he’s on the hardwood. Hicks tells why he enjoys playing basketball so much.

“I love the feeling of making a good play and having fun while playing,” Hicks said. “Winning is the best feeling. There’s nothing that compares to being in the locker room after a big-time win.”

Hicks has learned many valuable lessons from playing basketball that he applies to his everyday life.

“My favorite memory was bringing my team back from being down 10 points in the last two minutes and scoring seven points in those minutes and the game-winning 3,” Hicks said.

Lloyd King is his Hicks’ coach for the Texas Footwork Bengals.

King explains the best parts of Hicks’ game on the hardwood.

“He has some of the best footwork I have seen on a big. He reverse pivots, drop steps and counters effortlessly.  He can also step out shoot the midrange or three,” King said. “He's aggressive and does not give his defender a break. He uses his leverage to get his shot off.  His aggressive style keeps him at the free throw line.”

Hicks takes his role as one of the leaders on the team very seriously. Hicks makes sure he’s a daily positive influence on his peers.

“After a mistake or bad play I’m always the first one to tell my teammates to lift their heads up and tell them to make up for it on the other end,” Hicks said. “The best advice I give is to pick your heads up, look focused on the next play and don’t dwell on the past.”

King adds that Hicks is one of those consummate teammates that every squad needs to be successful.

“He is dialed in when he in on the bench and pays attention to what the other team is doing,” King said. “He's fully prepared when he gets in the game. This has a positive effect on his peers.”

Hicks is appreciative of having amazing male role models that are supportive.

“My coaches have helped make me a better player and person on and off the court,” Hicks said. “I have learned that you should never focus on something in the past because that play is over. Whatever you’ve done is over. Don’t make the same mistake and keep pushing. They tell me I have to apply myself and that nothing is going to be handed to me.”

King is an advocate of Hicks’ capabilities.

“During a Vype tournament earlier this year we were down three starters leaving us with six players,” King said. “Daruis stepped as a starter and pulled down timely rebounds and putbacks in the championship game against Cy-Fair Elite.”

In addition to making clutch plays, Hicks is developing a high level of basketball IQ as well.

Hicks is growing into excellent basketball awareness that puts him in position to thrive.

“Darius plays QB for his Middle School.  His overall sports IQ is unbelievable,” King said. “He has a natural knack of knowing what is going on on the court especially in breaking the press.”

Hicks is on the grind to perfect and hone his craft in any way possible.

“Darius has a great motor from being a two sport player,” King said. “His conditioning is always great because he works out with Coach Darren Hendricks over at Texas Footwork in the offseason.”

King explains why he compares Hicks to this player.

“I would compare him to Draymond Green for his versatility on offense and defense,” King said. “He’s a player that can do a little bit of everything.”

Hicks patterns his mentality on the court after the three-time NBA champion.

“I look up to Draymond Green because he isn’t the best player on his team but he is a key part of that team with how he does the little things that helps them succeed,” Hicks said.

Hicks is constantly striving for greatness in everything that he does.

“I want to always do the best that I can on and off the court,” Hicks said. “I want to make my family proud of me in everything that I do as a player and person.”

“My dream college is Clemson because of the talent they produce and their academic success throughout the nation.” King said. “I would love to play for Clemson and it would be a real honor to be a Tiger.”

Hicks lists math as his favorite subject in school.

“The way numbers work fascinate me in a way,” Hicks said. “Math is a very important subject you need in your real life.”

King outlines the areas of improvement that will take Hicks to the next level on the hardwood.

King believes the sky is the limit as long as Hicks continues to stay hungry.

“He will have a high upside as he becomes more accustomed to physical play as a two-sport player.  He has the footwork to become a great low post player if he continues to grow,” King said. “With continued work his face to the basket game will also be more consistent.”