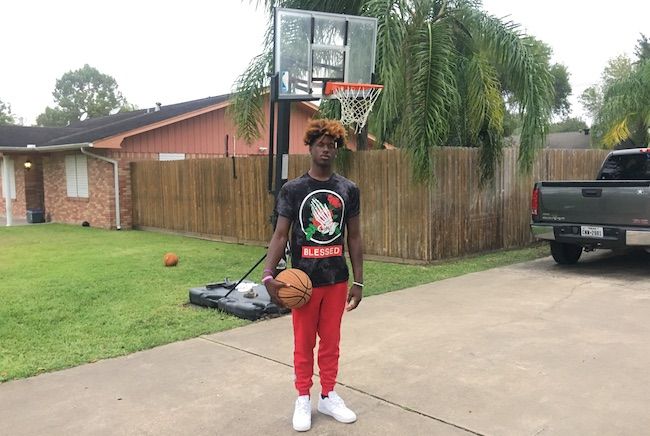 Christian Dorsey is one of the best players from the Houston, Texas area in the Class of 2022.

The 6-foot-2, 175-pound Dorsey, who attends Hitchcock High School, is a dynamic player that works as a point guard, shooting guard and small forward. Dorsey has previously played for Adidas Team Faith (2017) and Team Harden (2018). 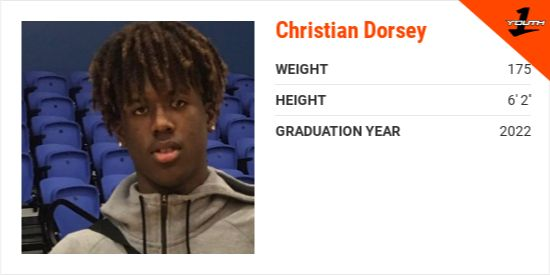 Dorsey has earned plenty of recognition during his career, such as capturing Ninth Grade Newcomer of the Year for Hitchcock High School and participating in the AAU- Adidas Gauntlet.

Dorsey is humbled by the accolades.

“To be recognized felt good. I played to the best of my ability and people noticed me. The all-star events were a great experience and I was able to see a lot of talent,” Dorsey said. “The all star events helped me realize that there are a lot of other talented kids out there and I have to continue to work hard.”

No matter the opponent, every game Dorsey is determined to give it his all.

Dorsey is going all out.

The motor is always at full throttle whenever Dorsey steps between the lines.

“My mindset is to score or pass,” Dorsey said. “I want to make plays for my team and have the other team not getting anything simple when I’m out there on the court.”

Dorsey has great passion and energy whenever he’s on the hardwood. Dorsey tells why he enjoys the game of basketball so much.

“What I love most about playing this game is the feeling it gives,” Dorsey said. “It’s live and I love the cheering from the crowd.”

Dorsey has learned many valuable lessons from playing basketball that he applies to his everyday life.

“My favorite memory is the first time I dunked in a game,” Dorsey said. “It was a special moment that I’ll always remember.”

“He has started at the 2 and 3 spot for me on the basketball team and played the point guard spot also. At the point guard spot, his ability to pass the ball/vision is good. At the 2, he can shoot the ball well, also. At the 3, I like his athleticism and ability to finish/slash to the rim.” Jordan-Foster said. “As far as technique goes, he is a natural. He does a great job at getting to his spots.”

Dorsey takes his role as one of the leaders on the team very seriously. Dorsey makes sure he’s a daily positive influence on his peers.

“I try to be a good leader for my teammates to follow. I try to always be positive and motivate the other players before and during the game,” Dorsey said. “The best advice I give to my teammates is to be good to the game and the game will be good to you.”

Jordan-Foster adds that Dorsey is one of those consummate teammates that every squad needs to be successful.

“He demonstrates leadership by his play,” Jordan-Foster said. “He is a go to guy in big moments and doesn’t shy away when it’s time to step up. I expect him to make a big play.”

Dorsey is appreciative of having amazing male role models that are supportive.

“My coaches have helped make me a better player and person on and off the court,” Dorsey said. “They have taught me to always work hard and be respectful to others. The best advice I’ve gotten from my coaches is always give it your all and leave it all on the court.”

Jordan-Foster is an advocate of Dorsey’s capabilities.

“Down the stretch in games this past season he has made made clutch baskets for us or came up with a big steal,” Jordan-Foster said. “In the big games he has came up with great blocks or got to the rim and finished when we needed at basket.”

In addition to making clutch plays, Dorsey also has a high level of basketball IQ as well.

Dorsey has excellent basketball awareness that puts him in position to thrive.

“He uses his IQ to get guys easy baskets with his vision on offense sometimes the guys aren’t ready and he is a few steps ahead of them,” Jordan-Foster said. “He’s a very smart basketball player.”

Dorsey is on the grind to perfect and hone his craft in any way possible.

“His work ethic is solid,” Jordan-Foster said. “He will come in to get extra shots up and he has always looked good in individual training sessions.”

Jordan-Foster explains why he compares Dorsey to this solid pro.

“College/pro player I would compare him to would be Tyreke Evans,” Jordan-Foster said. “Just like him, he’s an athletic, bigger guard who is versatile. “

Dorsey patterns his mentality after this future Hall of Famer and three-time NBA champion.

“I look up to LeBron James,” Dorsey said. “I love the way he’s in command of his team and can do so many things at a high level.”

Dorsey is constantly striving for greatness in everything that he does.

“My goals on the court are to play hard and win the game,” Dorsey said. “Off the court my goals are keeping good grades and graduating high school.”

“I do not have a dream college at this time,” Dorsey said. “I’m grateful for any college that is willing to give me a chance to continue my dreams where I can get a good education.”

Dorsey lists math as his favorite subject in school.

“I like math because I’m good with numbers,” Dorsey said. “Math is an important subject that you need to understand in the real world.”

Jordan-Foster outlines the areas of improvement that will take Dorsey to the next level.

“Areas of improvement are breaking down film and being a little more vocal in his leadership role. I want him to see the things that need improvement and why on film,” Jordan-Foster said. “I told him moving forward he is going to have to break down film.”

Jordan-Foster believes the sky is the limit as long as Dorsey continues to stay hungry.

“Potential wise he will definitely be able to go to an upper level, mid major school,” Jordan-Foster said. “I told him this season and his junior season he is going to have to show that he can go to a school in a Power 5 conference because he has that type of talent.”