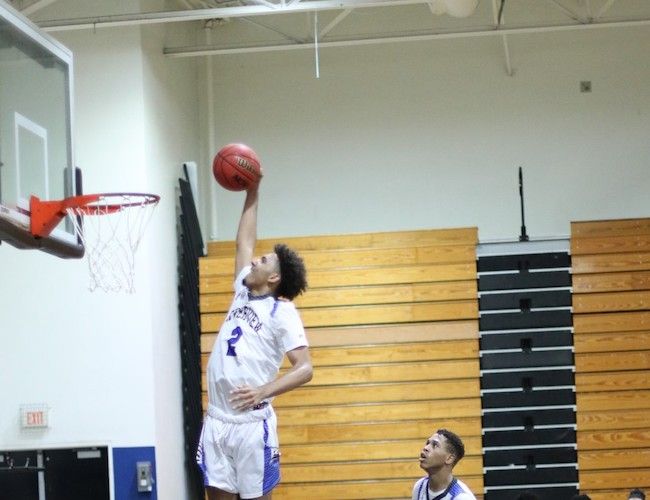 Riverview High School’s Tyler Cauley is one of the most versatile players from the Tampa, Florida area in the Class of 2021.

The 6-foot-5, 191-pound Cauley, who is the little brother of NBA center Willie Cauley-Stein, is a dynamic player that works as a point guard, shooting guard, small forward and power forward for the Tampa BayHawks. 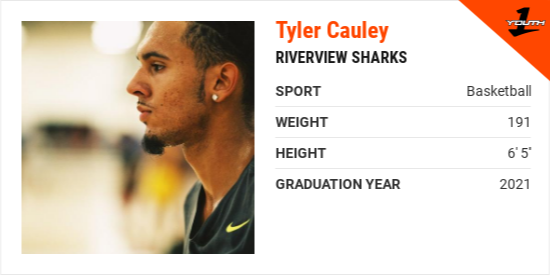 No matter the opponent, every game Cauley is determined to give it his all.

Cauley is going all out.

The motor is always at full throttle whenever Cauley steps between the lines.

“At the point guard position, I feel free and like I’m in control of everything and I have the ball in my hands. I can facilitate and score and do a mixture of everything. So point guard could actually be my favorite position,” Cauley said. “But at small forward I’m either going to be a 3-and-D player and or a slasher that’s going to get to the basket for a dunk or a layup. Just do whatever I need to do to win.”

Cauley has great passion and energy whenever he’s on the hardwood. Cauley tells why he enjoys the game of basketball so much.

“I love the game day feeling I get,” Cauley said. “When I know it’s game day I’m locked in and in a good mood for the whole day.”

Cauley has learned many valuable lessons from playing basketball that he applies to his everyday life.

“Hard work is always rewarded, so always continue to work even when no one is watching,” Cauley said.

“I believe it was my freshman year playing vs. the Riverview Sarasota. The previous year my school went 0-20. I came in the season starting as a freshman. I was off all game. I only hit fast break layups,” Cauley said. “But at the end of the game I hit two 3s in crunch time and the game-winning free throw.”

Byron Batchelor has coached Cauley for three years with the Tampa BayHawks.

“Tyler plays positions 1-4. He’s very versatile. At PG, Tyler is 6-foot-5, so he’s bigger and stronger than most guards. And, at forward he’s usually too quick and a good outside shooter,” Batchelor said. “Tyler’s versatility and iQ makes him an elite player.”

Cauley takes his role as one of the leaders on the team very seriously. Cauley makes sure he’s a daily positive influence on his peers.

“You have to lift your team up, show your teammates you have their back and y’all are going to compete at a high level together. I just try to lead as best as possible,” Cauley said. “ The best advice I have given is to have fun. I had a teammate who just looked like they were going through the motions. I pulled them aside and told them to loosen up and have fun while they play and let the game just slowly come to them.”

Batchelor adds that Cauley is one of those consummate teammates that every squad needs to be successful.

Cauley is appreciative of having amazing male role models that are supportive.

“Well, I have learned you’ve got to show respect and have discipline. Also, you need to have a good attitude. I feel like if you stay on top of those things you will become a good player while becoming a better person,” Cauley said. “I was getting frustrated in one tournament. My AAU coach for the Tampa BayHawks pulled me aside after a timeout and told me to stop complaining and stay quiet and just play and worry about winning. I listened and at the end of the game I had 30 points and we didn’t come out on top but the game was completely different.”

Batchelor is an advocate of Cauley’s capabilities.

“Tyler always makes the right play. He’s a very unselfish player and willing to do whatever it takes to win,” Batchelor said. “He’ll make a great outlet pass, set a good screen or he can make the big shot.”

In addition to making clutch plays, Cauley also has a high level of basketball IQ as well.

Cauley has excellent basketball awareness that puts him in position to thrive.

“Tyler played up on the 17U team as a 15-year-old and was a starter on a very good team,” Batchelor said. “His IQ keeps him in the game because I trust him offensively and defensively.”

Cauley is on the grind to perfect and hone his craft in any way possible.

“Tyler has a good work ethic,” Batchelor said. “He has a passion to play on the next level.”

Batchelor explains why he compares Cauley to this former NBA player.

“Tyler reminds me a little of Rick Fox,” Batchelor said. “He can play several positions, high IQ, good defender, good passer, unselfish and has a toughness to where he will mix it up with opponents.”

Cauley patterns his mentality after these players.

“In college I watch Myles Powell and in the NBA I watch Devin Booker,” Cauley said. “They both are elite scorers and I like that, but when they get rolling and on fire they also have no problem making the extra pass and facilitating the ball. I just feel they are all-around players on their levels.”

Cauley is constantly striving for greatness in everything that he does.

“I dream of following in my brother’s footsteps in playing Division I college basketball. Some schoolsIi have always had in mind would be Kentucky, Georgia, Syracuse, and Seton Hall. I have always watched these programs and they have always seemed like good programs that’s good at development,” Cauley said. “But most of all I want to play college basketball because I fell in love with the game. I feel like college is my ticket to go to the NBA. Basketball is my escape from everything around me. When I play basketball I just feel free and my mind is empty, so that to me shows I love it. I want to stay with it and make it a career.”

Cauley lists english as his favorite subject in school and aspires to major in communications in college.

Batchelor outlines the areas of improvement that will take Cauley to the next level.

“Tyler needs to continue to work on all aspects of the game because he’s asked to play positions 1-4 at a high level,” Batchelor said. “All Ty needs to do is keep working and playing more pick up.”

Batchelor believes the sky is the limit as long as Cauley continues to stay hungry.

“Tyler has the potential to be a high-major college player,” Batchelor said. “He’s 6-foot-5, 16 years old with a college body. He has the DNA. His level of success is totally up to him.”