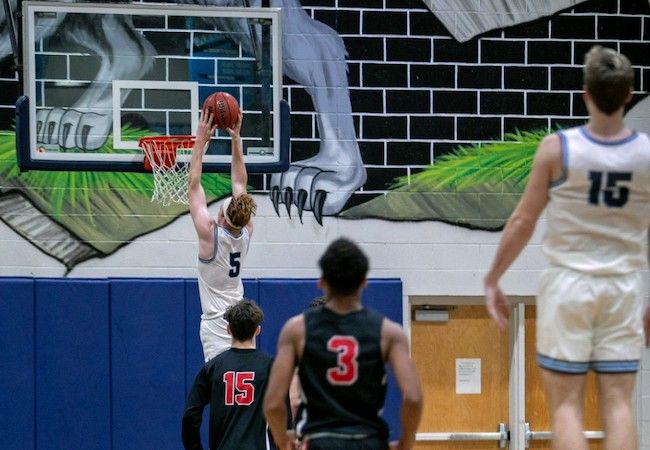 Owen Wightman is one of the best players from the Lithia, FL area in the Class of 2021.

The 6-foot-7, 216-pound Wightman, who attends Newsome High School, is a dynamic player that works as a small forward and power forward for the Tampa BayHawks. 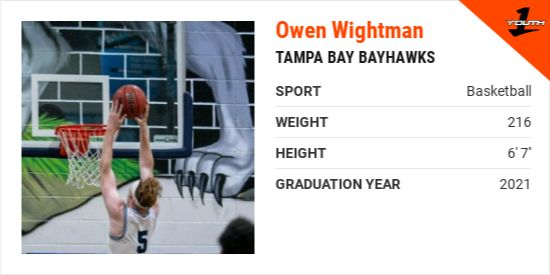 Wightman has earned plenty of recognition during his career, such as being a back-to-back AAU Impact showcase MVP (2018, 2019).

Wightman is humbled by the opportunity to compete against the best of the best and showcase his skills.

“It’s nice to see that I’m getting recognized, but I’m not satisfied with just those awards. I want to keep improving my game,” Wightman said. “It’s a great experience to play with guys that talented and see how easily the game flows and a good driving factor to keep me motivated to want to get better.”

No matter the opponent, every game Wightman is determined to give it his all.

Wightman is going all out.

The motor is always at full throttle whenever Wightman steps between the lines.

“My mindset is to always do what I can do to give my team the best possibility to win,” Wightman said. “Whether that be taking advantage of my opportunities with the ball in a position to score or setting up my teammates to score, but to always play great team defense and get every rebound possible.”

Wightman has great passion and energy whenever he’s on the hardwood. Wightman tells why he enjoys the game of basketball so much.

“I just love being out on the floor with my guys, making great plays, making great memories and working my hardest to hopefully get myself in a situation to eventually support my family,” Wightman said.

Wightman has learned many valuable lessons from playing basketball that he applies to his everyday life.

“Playing basketball has taught me hard work goes a long way and you can see it because I’ve been working hard ever since I was little to get where I am today,” Wightman said. “I keep getting better and seeing that shows me that you can do that with anything in your life.”

“My favorite memory playing is going to Atlanta and playing up in the Elite 32 tournament at McEachern High School and being able to hold my own and do what I knew I can do at a more advanced level,” Wightman said. “It was great to play with older guys and gain knowledge from them and see how they play with more experience.”

Byron Batchelor has coached Wightman for two years with the Tampa BayHawks.

Wightman takes his role as one of the leaders on the team very seriously. Wightman makes sure he’s a daily positive influence on his peers.

“I demonstrate being a good teammate by always keeping everyone focused, locked in to the game and making sure they have the right mindset going in. Also making sure they know they’re trusted and to play how the rest of the team knows they can play. Making sure they never get too down after a mistake,” Wightman said. “I tell them to don’t be scared. Don’t get nervous. We’re all out here to do one thing:  play basketball and win. So regardless if you don’t know a play or make a mistake you need to have a short memory. Don’t let any moment get too big for you and stay locked in and be a basketball player. Do what you did to be in the situation you’re in.”

Batchelor adds that Wightman is one of those consummate teammates that every squad needs to be successful.

Wightman is appreciative of having amazing male role models that are supportive.

“My coaches have taught me that no matter what, be yourself. Be the player you are and that everyone knows you are. Be the man you are and don’t let anyone besides yourself affect that,” Wightman said. “The best advice my coach has given me is to score and basically do what I do. Don’t get caught up in everything else. Score the ball, get your guys open looks and be the basketball player we know you are.”

Batchelor is an advocate of Wightman’s capabilities.

“Last July, Owen played up with our 17u team for live period in Atlanta,” Batchelor said. “Owen really impressed me that weekend. He stepped up big time.”

In addition to his playmaking skills, Wightman also has a high level of basketball IQ as well.

Wightman has excellent basketball awareness that puts him in position to thrive.

“Owen is a smart kid with a good understanding of his abilities on the court,” Batchelor said.

Wightman is on the grind to perfect and hone his craft in any way possible.

“Once Owen decided he wants to dominate, he usually dominates,” Batchelor said.

Batchelor explains why he compares Wightman to this dependable big man.

“If I had to compare Owen to an NBA player I would say David Lee because of Owen’s ability to score around the basket with both hands, rebound, and being a good athlete,” Batchelor said.

Wightman patterns his mentality after these elite pros.

“I look up to Giannis from a transition standpoint to just see how he can get it and go. Even though he’s not a guard, he drives down the floor and makes his move to score or put himself in a position to get fouled. LeBron for a passing standpoint, just watching how he drives to get his guys open and how he makes everyone on the floor better by being himself. Anthony Davis from an all-around standpoint, especially defensively because he plays great on-ball defense and amazing help side defense. He’s always affecting other people’s shots and always there to rebound the ball, plus diving out of bounds to save it and what not,” Wightman said. “Also Zach Randolph’s mentality is something I admire a lot. Knowing he’s not the most athletic or the most talented but doing what he does great and putting himself in a position to make a play and get it done.”

Wightman is constantly striving for greatness in everything that he does.

“My goals on the court are to go as far as I can go with basketball and eventually put myself in a position to provide for my family doing the thing I’ve worked so hard for and love,” Wightman said. “Off the court, I want to get an education and set myself up to do something I love if basketball has to come to an end.”

Wightman lists math and history as his favorite subjects in school.

“History is interesting, seeing what our country and others have gone through to get to the point we’re at today,” Wightman said. “Math because when you know what you’re doing and how to do it, it can be really fun.”

Wightman’s dream college to attend is the University of Florida.

Batchelor outlines the areas of improvement that will take Wightman’s game to the next level.

“I really want Owen to play more of the small forward position,” Batchelor said. “Owen being able to handle the ball, make passes and knockdown shots from the perimeter will be the deciding factor in that. Also, guarding opposing teams’ perimeter players.”

Batchelor believes the sky is the limit as long as Wightman continues to stay hungry.

“If Owen puts in the work and plays with passion for 32 minutes, I think Owen will be a Division I player,” Batchelor said. “He’ll have his opportunities this summer for sure to impress college coaches.”