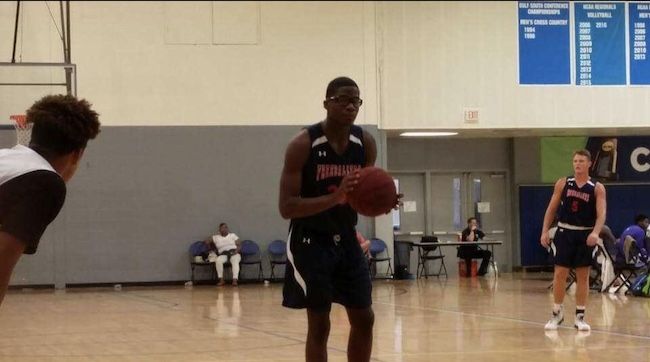 Quidarius Henderson is one of the best players from the Cottondale, FL area in the Class of 2020.

The 6-foot-4, 190-pound Henderson, who attends Cottondale High School, is a dynamic player that works as a center and power forward. 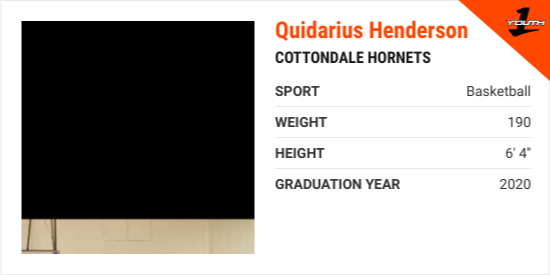 “My mindset is to control the paint and be as aggressive as possible,” Henderson said. “I want to make my opponent have to work for anything they get on the court when I’m out there.”

Henderson has great passion and energy whenever he’s on the hardwood. Henderson tells why he enjoys the game of basketball so much.

“What I love the most about basketball is playing with my close friends and having fun,” Henderson said. “It’s a great feeling to win games with my teammates and have a great time in the locker room.”

Henderson has learned many valuable lessons from playing basketball that he applies to his everyday life.

“Playing basketball has taught me so much about life in general,” Henderson said. “It has taught me that whether you win or lose you always need to keep your head up at all times, no matter what.”

“Playing against Marianna High my junior year because every play made by my team brought so much electricity to the crowd,” Henderson said. “It was a great game against our rival and it was a special memory.”

“Quidarius plays power forward and center for us. The best parts of his game are defense, rebounding and running the court. He has a great motor on the court and he’s always out there hustling,” Obert said. “He’s very athletic, moves very well laterally and gets off the floor very well.”

“I try to be a good teammate by doing all the right things and keeping a good attitude. I try to set a good example for the other players to follow,” Henderson said. “The best advice I give to my teammates is to keep your head up and keep playing hard.”

Obert adds that Henderson is one of those consummate teammates that every squad needs to be successful.

“He leads by example with his effort and attitude in whatever we do, whether it is on the court, in the weightroom or in the classroom,” Obert said. “That has a contagious effect on the rest of the team.”

“My coaches have helped make me a better player and person on and off the court,” Henderson said. “My coaches have taught me to always work as hard as you can at anything you do in life. The best advice my coaches have given me is to keep a chip on your shoulder and always have a good attitude.”

Obert is an advocate of Henderson’s capabilities.

“He’s had some nice dunks that got his teammates and the crowd hyped up,” Obert said. “At any given moment he can rise up and throw it down. That brings a lot of energy to our team and our fans.”

In addition to making clutch plays, Henderson also has a high level of basketball IQ as well.

Henderson has excellent basketball awareness that puts him in position to thrive.

“He’s always in the right spot defensively and is able to rotate over and cover up teammates’ mistakes on D,” Obert said. “He’s a very smart player that is aware of where he needs to be on the court.”

Henderson is on the grind to perfect and hone his craft in any way possible.

“Q is an extremely hard worker, one of the hardest I’ve ever had. He’s always looking for ways to make himself better,” Obert said. “He’s a grinder when the lights are off and nobody is looking. Those are the kinds of players that have successful careers.”

Henderson patterns his mentality after this future Hall of Fame point guard.

“I look up to Russell Westbrook because he always plays aggressive and keeps attacking,” Henderson said. “That’s the way I try to be out there at my own positions on the court. I want the other team to feel me out there.”

Henderson is constantly striving for greatness in everything that he does.

“If I could play at any college, it would be at Florida State because it’s close to home,” Henderson said. “It would be a dream to be a Seminole and help them win their first national title in basketball.”

Henderson lists science as his favorite subject in school.

“I like science because it has a wide window of study,” Henderson said. “Science is really important in helping us understand the world around us and how to make it a better place.”

Obert outlines the areas of improvement that will take Henderson to the next level.

“He needs to work on his ball handling and shooting to become a better and more complete offensive player,” Obert said. “I’m confident he’ll be able to do so because of his work ethic and desire.”

Obert believes the sky is the limit as long as Henderson continues to stay hungry.

“I think he has a chance to be at a small college for basketball because of his work ethic on the court, in the weightroom and in the classroom,” Obert said. “He’s a 4.0 student who is already taking college classes. He’s a high character kid that will be successful in whatever he does.”