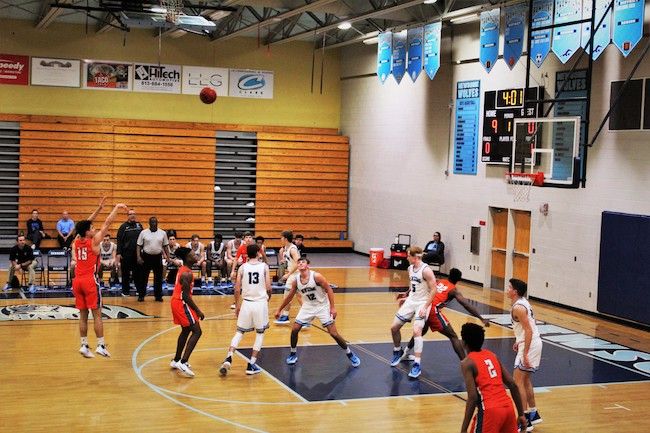 Dylan Richards is one of the best players from the Plant City, FL area in the Class of 2020.

The 6-foot-1, 175-pound Richards, who attends Plant City High School, is a dynamic player that works as a shooting guard for the Tampa BayHawks. 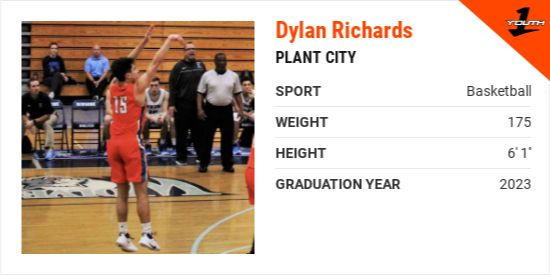 No matter the opponent, every game Richards is determined to give it his all.

Richards is going all out.

The motor is always at full throttle whenever Richards steps between the lines.

“My mindset at my position is to make sure my teammates are getting good looks to score and that I am scoring at a high level to give my team the best chance to win,” Richards said.

Richards has great passion and energy whenever he’s on the hardwood. Richards tells why he enjoys the game of basketball so much.

“My favorite part about playing is competing,” Richards said.

Richards has learned many valuable lessons from playing basketball that he applies to his everyday life.

“Playing basketball has taught me to work hard for my goals,” Richards said.

“My favorite memory of playing was in a championship game at a tournament and winning it with my team against a Nike Circuit team,” Richards said.

Byron Batchelor has coached Richards for three years with the Tampa BayHawks.

“Dylan is a really good shooter. One of the best shooters around,” Batchelor said. “I love Dylan’s confidence as a shooter and his aggressiveness. Dylan is going to score.”

Richards takes his role as one of the leaders on the team very seriously. Richards makes sure he’s a daily positive influence on his peers.

“Being a good teammate to me means always being there for your teammates and help them be their best,” Richards said.

Batchelor adds that Richards  is one of those consummate teammates that every squad needs to be successful.

“Dylan is always the first kid in the gym and the last to leave,” Batchelor said.

Richards is appreciative of having amazing male role models that are supportive.

“I’ve learned from my coaches how to play the game and to understand it at a higher level to be able to make the right play,” Richards said.

Batchelor is an advocate of Richards’ capabilities.

“Dylan has made big shots his entire career. That’s just what he does,” Batchelor said. “One of his teammates joking around called him the White Kobe.”

In addition to his playmaking skills, Richards also has a high level of basketball IQ as well.

Richards has excellent basketball awareness that puts him in position to thrive.

“Dylan is a very smart kid on and off the court,” Batchelor said. “Dylan isn’t the biggest, strongest, most athletic kid but his passion and IQ helps him compete at a high level.”

Richards is on the grind to perfect and hone his craft in any way possible.

“Dylan has one of the best work ethics I’ve seen. He’s constantly in the gym getting up shots or working on his body,” Batchelor said. “Before and after games, Dylan will get up shots with his personal ball boy, his dad Michael.”

Batchelor explains why he compares Richards to this dependable big man.

“If I had to compare Dylan to an NBA player I would say JJ Reddick,” Batchelor said. “Dylan is a high-level shooter and scorer.”

Richards patterns his mentality after the Black Mamba.

“I look up to Kobe Bryant because of his work ethic and scoring ability,” Richards said.

Richards is constantly striving for greatness in everything that he does.

“My goals on and off the court are to be the best I can be at whatever I try to achieve in life,” Richards said.

Richards lists economics as his favorite subject in school.

Batchelor outlines the areas of improvement that will take Richards’ game to the next level.

“We’re working with Dylan on his ball handling under pressure, as well as being able to run offense and create for teammates,” Batchelor said.

Batchelor believes the sky is the limit as long as Richards continues to stay hungry.

“Dylan is currently being recruited by D-II and D-III schools,” Batchelor said. “If Dylan keeps working on the court and in the weight room, he’s going to be a good player on the next level.”