2020’s Desmond Brown brings grit and toughness to the court

2020’s Desmond Brown brings grit and toughness to the court 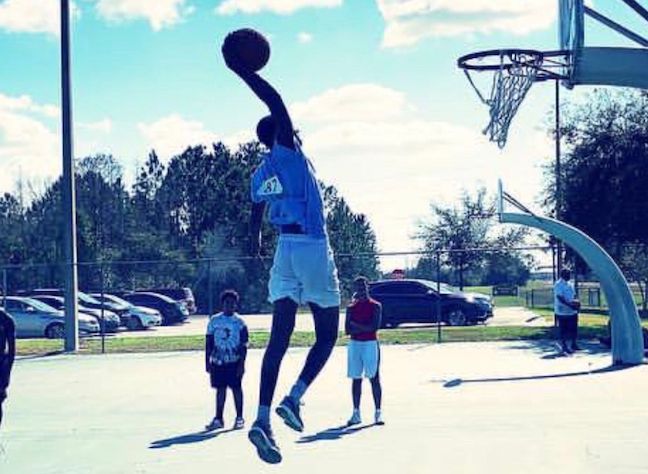 Desmond Brown is one of the best players from the Orlando, FL area in the Class of 2020.

The 6-foot, 158-pound Brown, who attends Liberty High School, is a dynamic player that works as a small forward, power forward and center. 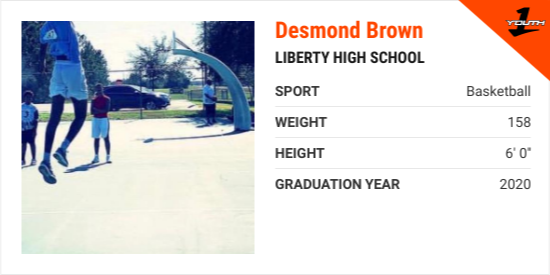 No matter the opponent, every game Brown is determined to give it his all.

Brown is going all out.

The motor is always at full throttle whenever Brown steps between the lines.

“My mindset whenever I step on the court is to score points, to defend and also rebound the ball,” Brown said. “I want to make an impact in a variety of ways so I can help my team win games.”

Brown has great passion and energy whenever he’s on the hardwood. Brown tells why he enjoys the game of basketball so much.

“It brings me happiness to play. I love the game of ball and it teaches me a lot about how to be self-disciplined,” Brown said. “Basketball is just a major part of my life and I’m so grateful for it.”

Brown has learned many valuable lessons from playing basketball that he applies to his everyday life.

“Playing the game of basketball has taught me a lot about life,” Brown said. “It has taught me that we are humans and humans make mistakes. It’s either we learn from it or we don’t. I learned to listen more and be observant in the game.”

“My favorite memory from basketball was playing for Evolution. We only had a six-man team against a full squad and we won,” Brown said. “We never gave up, we kept our stamina up and played smart.”

“He is a gritty player and loves to rebound and defend,” Morales said. “He has an excellent motor and a never quit attitude. The other team always has to be aware of him at all times out there.”

Brown takes his role as one of the leaders on the team very seriously. Brown makes sure he’s a daily positive influence on his peers.

“I’m not selfish on the court. I’m all about honesty on the court. I help them with their mistakes and they help me,” Brown said. “The best advice I give is to keep your chin up and never down. Always play smart and don’t rush it.”

Morales adds that Brown is one of those consummate teammates that every squad needs to be successful.

“He is a vocal player and also a player that leads by example,” Morales said. “He sets an excellent example for his teammates to follow. He has a positive effect on his teammates.”

Brown is appreciative of having amazing male role models that are supportive.

“From Coach Mo I learned how to help my teammates. Rather than to yell at them I learned to be humble and secure my ball,” Brown said. “The best advice I’ve gotten is to push myself every day. If I want it badly don’t procrastinate so I can make my dreams into a reality.”

Morales is an advocate of Brown’s capabilities.

“Desmond has made plenty of big blocks in games for us,” Morales said. “He’s a big-time player that you can always depend on.”

In addition to making clutch plays, Brown also has a high level of basketball IQ as well.

Brown has excellent basketball awareness that puts him in position to thrive.

“He uses his IQ to set up big blocks and also put his teammates in the right position on defense,” Morales said. “He’s a very smart basketball player.”

Brown is on the grind to perfect and hone his craft in any way possible.

“He’s a pretty determined worker,” Morales said. “He’s developing a shot and was working pretty hard to get better on offense. He has the kind of worth ethic you need to be successful.”

Morales explains why he compares Brown to this future Pro Basketball Hall of Famer.

“I always said he reminded me of Kevin Garnett because of how he plays defense,” Morales said. “He brings the same intensity and tenacity on the defensive end of the floor as Garnett did.”

Brown patterns his mentality after this NBA rookie.

“I would say Cam Reddish because he motivates me when I see him play to do more and to become better at the game,” Brown said. “He accelerates, he pushes the ball, he plays smart ball and I like him.”

Brown is constantly striving for greatness in everything that he does.

“I want to become an NBA player or professional basketball player,” Brown said. “I want to make it to the top. I want to go out here and pursue my dream to make it a reality. My goal is to be the best I can be at what I do.”

“My dream college I would like to go to is LSU,” Brown said. “LSU has always been my dream school. There’s so much excitement and energy at LSU home games. I would love to play in front of those great Tigers fans.”

Brown lists history as his favorite subject in school.

“I love learning about the past and present because we overcame a lot of obstacles in this world,” Brown said. “And we changed this world for good and bad. If you don’t understand the past, you can’t have a better future for the world.”

Morales outlines the areas of improvement that will take Brown to the next level.

“His offense. He is starting to develop a nice mid-range jump shot,” Morales said. “I’m confident he can become an even more dynamic player.”

Morales believes the sky is the limit as long as Brown continues to stay hungry.

“When his shot becomes more consistent he will be a serious problem,” Morales said. “I have complete faith that he’s going to be able to accomplish all of his goals and dreams.”