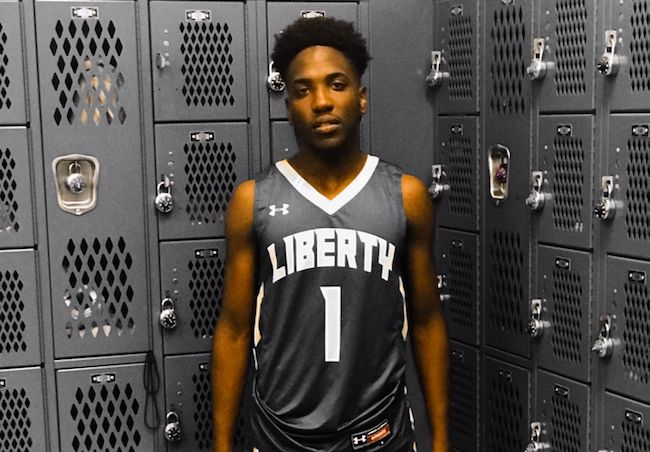 Brandon Jean Jacques is one of the best players from the Orlando, FL area in the Class of 2020.

The 6-foot, 165-pound Jean Jacques, who attends Liberty High School, is a dynamic player that works as a point guard, shooting guard and small forward. 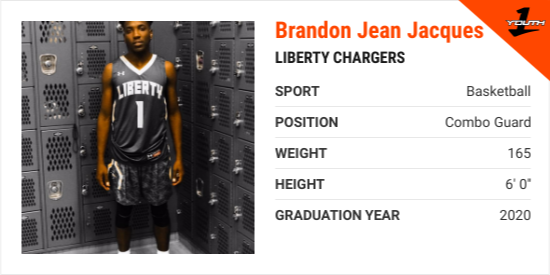 Jean Jacques has achieved plenty of success during his outstanding career, such as being JV MVP during his sophomore season.

Jean Jacques is glad he can step up for his team.

No matter the opponent, every game Jean Jacques is determined to give it his all.

Jean Jacques is going all out.

The motor is always at full throttle whenever Jean Jacques steps between the lines.

Jean Jacques has great passion and energy whenever he’s on the hardwood. Jean Jacques tells why he enjoys the game of basketball so much.

“I love the game, man. I love how it distracts me from everything and all I think is how I’m gonna score and make my team win and my teammates better,” Jean Jacques said. “I love the fans too. I love getting them hyped. I do it for my mom who passed away when I was two. I know she’s watching me from above and I want to make her proud.”

Jean Jacques has learned many valuable lessons from playing basketball that he applies to his everyday life.

“Playing the game of basketball has taught me a lot about life,” Jean Jacques said. “It’s taught me I’ve got to strive for greatness, never give up and always put my heart into it. If I want it I have to go get it and get that dog out of me.”

“My favorite memory of basketball was 11th grade on my AAU team Evolution,” Jean Jacques said. “My team was down 7 in the fourth and I was the best player on the team. I scored 7 straight points,  got an and-one and gave us the lead to win.”

“He is a natural scorer whose defense opens up his offensive game for him. He is a two-way player that makes an impact on both sides of the court,” Morales said. “The opponent doesn’t get any rest when he’s out there on the court.”

Jean Jacques takes his role as one of the leaders on the team very seriously. Jean Jacques makes sure he’s a daily positive influence on his peers.

“I demonstrate being a good teammate by motivating them through passing the ball and telling them what to do better,” Jean Jacques said. “The best advice I give my team is that they should always play hard and give it their all and try their best.”

Morales adds that Jean Jacques is one of those consummate teammates that every squad needs to be successful.

“If the team is down, he is the guy to lead by example and to make the big time shots,” Morales said. “He sets an excellent example for his teammates to follow. He has a positive effect on his teammates.”

Jean Jacques is appreciative of having amazing male role models that are supportive.

“The best advice my coach has given me is that I could make it somewhere someday,” Jean Jacques said. “I just have to put in the work and play my heart out and never give up and always stay strong and keep my head up and do me.”

Morales is an advocate of Jean Jacques’ capabilities.

“A play that stands out is him making a buzzer beater against Harmony during his first year with me. Also, leading the team in scoring his next two years with me,” Morales said. “He’s a big-time player that you can always depend on.”

In addition to making clutch plays, Jean Jacques also has a high level of basketball IQ as well.

Jean Jacques has excellent basketball awareness that puts him in position to thrive.

“He’s pretty instinctive on defense and he uses that to get easy buckets on offense,” Morales said. “He uses his defense to boost up his offense and that really helps the team out overall. He’s a very smart basketball player.”

Jean Jacques is on the grind to perfect and hone his craft in any way possible.

“He’s a certified gym rat, loves the game and is always trying to improve it,” Morales said. “He’s truly willing to put in the work and grind to become a better player. He has a great work ethic.”

Morales explains why he compares Jean Jacques to this NBA Finals MVP.

“He reminds me a lot of Andre Iguodala with how he uses his defense to open up his offense. Also his quiet leadership skills line up the same,” Morales said. “He’s a versatile player just like him.”

Jean Jacques patterns his mentality after these standouts.

“In college, the player I looked up to was Jared Harper. He’s just like me. He’s got that dog in him. It didn’t matter about his size. He worked hard to make it to the NBA,” Jean Jacques said. “My favorite player in the NBA was Dwyane Wade. He’s got that dog in him too. When it’s time for him to shine, he’s going to get it. He went through a lot like I have and fought hard and made it out and made his people proud and his dreams come true.”

Jean Jacques is constantly striving for greatness in everything that he does.

“My dream college I would like to go to is Auburn University. I’ve been looking at them,” Jean Jacques said. “They like little guards like me. So that’s my dream college but I’m open to any college I can get into so I can pursue my dream.”

Jean Jacques lists math and english as his favorite subjects in school.

Morales outlines the areas of improvement that will take Jean Jacques to the next level.

“His three-point shooting has gotten a lot better and I know he is working to broaden his game even more,” Morales said. “I’m confident he can become an even more dynamic player.”

Morales believes the sky is the limit as long as Jean Jacques continues to stay hungry.

“He just has to keep working hard and he will make an impact on somebody’s team somewhere,” Morales said.