Ruggieri arm, Wladyka bats too much for CT Grind in Turf final

Ruggieri arm, Wladyka bats too much for CT Grind in Turf final 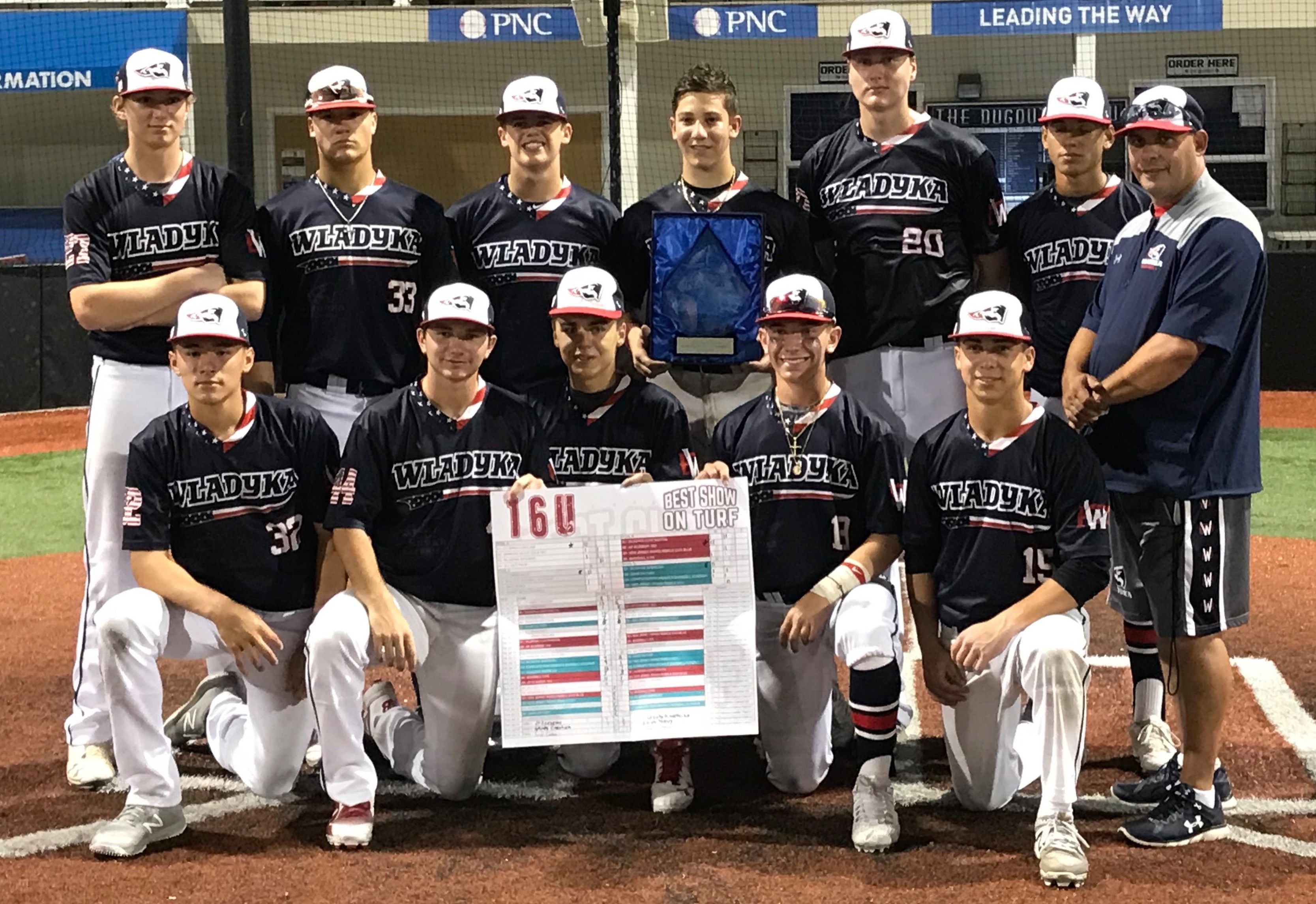 Righthander Michael Ruggieri pitched a four-hitter and Wladyka American mashed its way to a 9-1 victory over Connecticut Grind Carolina in the Best Show on Turf championship game last night at Diamond Nation in Flemington.

Ruggieri, a rising junior at Northern Highlands High School, struck out eight and walked four while stranding seven Grind runners in a game ended after five innings due to the eight-run mercy rule.

“My fastball and slider were good, but I mostly stayed with the fastball,” said Ruggieri, who did a nice job working the corners with his fastball. “I was trying to hit the outside corner because the ump was giving me out and up.”

The Wladyka batters quickly put Ruggieri in a nice comfort zone, striking for four runs in the top of the second inning after two were out. Ray Ortiz drew a one-out walk and scored on Zack Oswald’s two-out double down the left field line. Jacob Gomez walked and Andrew McDermott followed with an RBI single before Lou Fabbo capped the rally with a two-run single through the left side.

“We put the ball in play and got a couple a big two-out hits there,” said Wladyka coach Chip Benway, also the Union City High coach.

Wladyka got a another big two-out hit in the third after Garrett Kurtz drew a one-out walk. Ortiz stepped in and launched a no-doubt-about-it blast over the left-center field fence for a two-run home run and a 6-0 Wladyka lead.

“The bats definitely put me in good position,” said the 6-6, 240-pound Ruggieri. And Ruggieri’s arm, conversely, took the pressure off the Wladyka bats.

Wladyka tacked on three more runs in the fourth inning and Gomez started it with a leadoff walk. McDermott, Wladyka’s leadoff hitter, followed with an infield single to the shortstop hole. Both runners moved up a base on Fabbo’s deep fly to left field. The throw to third then got away and ended up in the Grind dugout, allowing Gomez to score and McDermott to moved to third base. Anthony Pannisidi followed with a booming triple to the gap in right-center field to score McDermott and boost the lead to 8-0. Pannisidi scored moments later on a wild pitch to extend the lead to 9-0.

The Grind got on the board in the bottom of the fourth on Bobby Arent’s two-out double to left-center field that scored Josh Wetteman from first. Wetteman had drawn a leadoff walk. Ruggieri would strand two runners in the inning thanks to first baseman Oswald’s nice stop of a hard shot by Michael Simonelli.

Anthony Depino (2-for-3) hit a grounds rule double to right-center with one out in the seventh for the Grind, but Ruggieri got the next two batters to end it.

“Michael stepped up big for us,” said Benway. “He was basically all we had left. We just got back from Georgia and were a little thin on the mound. It really helped playing one less game .” Wladyka’s 2 p.m. game on Sunday, scheduled for Hunterdon Central High School,  was rained out.

Wladyka (4-0) outscored its tournament opponents, 31-14. Connecticut Grind Carolina (4-1) held a 32-20 runs advantage on its opponents. Arent was 2-fo-2 for the Grind. McDermott went 3-for-3, drove in a run and scored twice for Wladyka.

The rest of the Best Show on Turf championship game.

The Diamond Jacks Super 13U squad edged Whiz Kids Future Stars, 4-0, in the Best Show on Turf championship game. Griffin Mills of Super 13U was named the tournament’s Most Valuable Player. The Super 13U outscored its opponents 32-14. The Whiz Kids held a 20-16 runs advantage on its opponents.

The Diamond Jacks Super 14U squad slipped past its brothers on the Diamond Jacks Gold 14U, 3-2, in the Red Best Show on Turf championship game. Nick Bergamotto and Kyle McCoy shared the tournament’s Most Valuable Player award. The Super 14U (4-0) held a 30-4 runs advantage on its opponents and the Gold 14U (2-1-1) outscored its opponents 27-7.

Crossbridge Raiders cruised to a 9-2 victory over NY Gothams 14U Red, 9-2, in the Best Show on Turf championship game. Aiden Myers of Crossbridge was named the tournament’s Most Valuable Player. Crossbridge (4-0) outscored its opponents 43-12. NY Gothams held a 21-9 runs advantage on their opponents.